I recently started a journey towards a doctorates degree.  I have longed believed most of all the required reading for leaders has already been written–so what in the heck am I going to do?

Well–attempt to uncover it and make it accessible to today’s leaders.  Ancient philosophy is ripe with leadership lessons for all eras.  Ponder Marcus Aurelius, the last good emperor, the most powerful man in the world, stoic philosophy (Stoicism) was intended to be applied to everyday living, focused on ethics (understood as the study of how to live one’s life), which was in turn informed by what the Stoics called “physics” (nowadays, a combination of natural science and metaphysics) and what they called “logic” (a combination of modern logic, epistemology, philosophy of language, and cognitive science).

Over the years, I have definitely become a student of stoicism–but I always struggle to actually say I am a stoic, as there is such a long way to go.  The concepts are pretty simple, yet really take a lifetime to master. 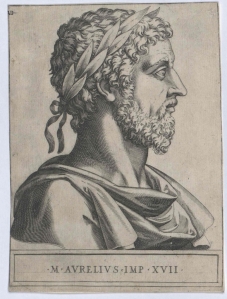 1. Accept only what is true.

2. Work for the common good.

3. Match our needs and wants with what is in our control.

4. Embrace what nature has in store for us.

Marcus repeatedly reminds himself what Stoicism is. These bullet points are helpful to those of us reading thousands of years later, but really they were intended to be helpful to him. Maybe that day he had accepted a bad impression or had acted selfishly. Maybe he had pinned his hopes on something outside his control or complained and fought against something that had happened. Or maybe it had just been awhile since he’d thought about these things and wanted a reminder.

Whatever his case was, or whatever ours is today, let’s align our minds along these four critical habits:

Our rational nature moves freely forward in its impressions when it (rephrased, different translation):

1) accepts nothing false or uncertain;

2) directs its impulses only to acts for the common good;

3) limits its desires and aversions only to what’s in its own power;

4) embraces everything nature assigns it.