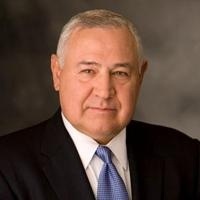 DeM Banter: I’m sure each one of these ideas is a paper or a book all on to itself…the concepts are all great, but they all cost money. There is an initial startup fee that must be paid for each…so spending would actually spike before it would actually come down (probably). The other disturbing issue…this involves a comprehensive strategy that must be developed, fleshed out, debated…passed through congress…that will take time…and vision from a leader that arcs well beyond politics and the political season….this would require give and take on both sides of the aisle and it would require a leader the is all about the greater good….not about personal power…just hope that leader is out there.

The sequestration threat hovering over the Department of Defense could hold dire consequences for U.S. national security. Sequestration would take $500 billion out of the defense budget, leading to the potential loss of hundreds of thousands of jobs – perhaps millions – and leaving vital defense programs and projects hanging in the balance.

But the prospect of sequestration also invites policymakers to consider whether military planners could reduce defense spending by making different decisions about defense and intelligence resources.

We should be thinking about a ‘new normal’ when it comes to overall military strategy. The nature of the threats and challenges we face is evolving. We can’t continue to fight the last war. In the current environment, and in anticipation of future changes to our military strategy, defense planning and budgeting must surely be about becoming more efficient and tactical in an era of declining resources.

As for the new normal, we believe we’re already in it. The issue is that we just haven’t acknowledged it sufficiently in the context of our political debates. Anyone who understands the military or the industries that support it certainly comprehends this new reality.

Instead of the blunt instrument of sequestration, we should change how we budget, to focus on applying technology and get more defense for fewer dollars. As part of that thinking, we might consider the following approaches.

– An emphasis on technology asymmetries such as stealth, the use of drones and superior intelligence can prove to be a preferable substitute for more expensive conventional forces. Our asymmetries elevate the United States military industrial complex above the rest of the industrialized world. As a result, Intelligence, Surveillance and Reconnaissance (ISR), precision engagement and nuclear capabilities should be our spending priorities in the years ahead. Speed, agility and technological superiority are the U.S. military’s global calling cards.

– Consolidation of redundant service capabilities is critical to building a leaner but no less impactful military presence. For example, one possible strategic approach might be a concentration on consolidating the different strategic and tactical air capabilities now housed in each of the armed services — an obvious means of saving money while accepting reasonable risk.

– Revamping of the acquisition process to have the service chiefs involved in not only weapons systems requirements definition, but the acquisition and decision making process. The current system is fraught with an over-engineered process that reduces the ability for the more creative and cost-efficient solutions to be brought forward in a timely fashion.

– The financial promise we’ve made to our veterans remains sacrosanct. Although we still believe that Veterans Affairs will be exempted from the sequestration process, as the administration and Congress have assured us, we need to redouble our efforts to preserve adequate short- and long-term health care and treatment, in particular, for wounded warriors. In the future, military personnel costs overall, will undoubtedly be a part of the cost-cutting discussion. Veteran benefits could be retooled to better reflect need and resource availability – and save money in the bargain – without compromising our unbending commitment to their well-being.

Just as importantly to military planners, the new normal offers opportunities for the defense industry. The U.S. will not be designing and building next generation aircraft carriers or vast new missile systems or a new fleet of tankers any time soon, as technologically advanced systems for these capabilities are already in development. The nation’s vision should be trained on enhancing our current military capability with the kinds of upgrades that maintain U.S. military superiority. Defense contractors are well placed to help with platform re-purposing, upgrades and derivatives to field necessary capabilities quickly.

That’s the nature of sovereign national security in the 21st century. According to the Defense Security Cooperation Agency, the U.S. sold $66.3 billion in weapons overseas in 2011, accounting for nearly 78 percent of all global arms sales – and marking a dramatic increase over our previous high in the sales of arms, the $38.2 billion sold in 2008. It clearly enhances the ability of our allies to secure peace across the globe.

One of the big issues we continue to address is how to enable U.S. industries to be more competitive internationally. That’s where the markets are. Competition rises, and different techniques are demanded. But it’s an unmistakable opportunity for the American defense industry.

These proposals, considered collectively, can make modern and efficient decision-making not just a priority, but a reality. The bottom line is this — we can’t have everything and we can’t afford everything. And what we most certainly can’t afford is any further delay in revising our military planning fundamentals to reflect the real world.

No one wants sequestration as it now stands. The chorus of opposition to the mandated budget cuts has been rising in recent weeks among both the military establishment and among legislators on the Hill as the deadline for implementation draws closer.

Without question, policymakers face difficult and even delicate decisions in determining an intelligent path that doesn’t lead directly to the fiscal cliff. That said, the idea of sharply reducing defense spending affords them the chance to refocus their attention on how we plan and budget for our national defense.

One Reply to “Defense Industry Must Embrace ‘New Normal’ By Charles F. Wald”