DeM Banter:  Well thought out piece…and this is indeed a leadership test for not only the US, but the global community as well. It’s tough if we believe the military is the only option..if it is….can we offer only a limited option…or does a full scale option have to be on the table as well?  Further…we have discussed on this blog several times….it is all about choices–we continue to choose to cut the military while at the same time asking for more of it.  Interesting times for sure…tough choices to be made for sure…my two cents…all “t”s should be crossed (Congress on board) and “i”s dotted… UN and allies in as well…especially the Arab League.  There are a lot of players on this field…This one could get messy real quick…

If no one else will answer Syria’s use of chemical weapons, the U.S. must. 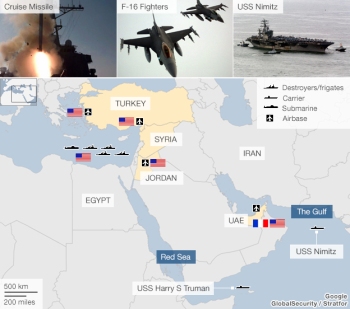 A PERCEPTION has been growing over the past week that President Obama has worked himself into a jam on Syria policy. We agree that he faces no easy options, and that some of his challenges ensue from his mistakes as well as those of the previous administration. But let’s be clear: It’s not Mr. Obama, nor George W. Bush, who has brought the United States to this difficult place. It is the crime against humanity allegedly committed by Syria’s leader and the fact that no country other than the United States can or will respond fittingly to such a crime.

Possibly the largest constraint Mr. Obama is encountering as he contemplates military action in Syria stems from the intelligence blunder that preceded the U.S. invasion of Iraq. The Bush administration, like the Clinton administration before it and the governments of all its major allies, was convinced that Saddam Hussein was hiding weapons of mass destruction. Most Americans, including this page, were convinced, too. It is no surprise, and it is not a bad thing, that this time around people are demanding more evidence than they otherwise might.

Mr. Obama also is reaping the fruits of his own advocacy of disengagement from the Middle East. The president repeatedly has told the American people that the era of war was ending, that the United States could concentrate on nation-building at home and that it had no vital interests in Syria as that nation collapsed into civil war and began to endanger its neighbors. Americans, and U.S. allies, too, naturally would want some explanation of why all that may have changed.

The British Parliament’s vote against military action has compounded the challenge. This time around, the United States may have few but the French on its side. A president who has stressed commitment to international law is faced with going it nearly alone and certainly without the U.N. Security Council, where Syria’s abettors Russia and China stand in the way.

The American people are understandably war-weary, and their Congress reflects that view. But Americans, even when not weary of war, are almost always wary of it, and that is good. It should never be easy to go into battle, even for a “surgical strike” or a “limited engagement.” If Mr. Obama chooses to fire missiles at Syria, people will die, including some civilians, and unpredictable consequences will follow. There had better be good reason.

On Friday, Secretary of State John F. Kerry laid out that reason. Syrian dictator Bashar al-Assad, Mr. Kerry said, has used against his own people a weapon that for 90 years the international community – sometimes known as the civilized world – has deemed beyond the pale. This was not a question of possibly developing or manufacturing or storing such weapons; it was blatant use, killing or injuring thousands, including, Mr. Kerry said, at least 426 children who died. “[I]f we choose to live in the world where a thug and a murderer like Bashar al-Assad can gas thousands of his own people with impunity, even after the United States and our allies said no, and then the world does nothing about it,” Mr. Kerry said, “there will be no end to the test of our resolve and the dangers that will flow from those others who believe that they can do as they will.”

Some ask why the United States should care about 1,400 deaths from gassing when more than 100,000 have died in Syria’s war. We’re among those who believe the administration should have done more, short of boots on the ground, to forestall those deaths, and we believe that any military action should be part of a strategy to influence the war’s outcome.

But these deaths are different. A line has been crossed; if there are no consequences, it will be crossed again. Someday U.S. soldiers on a battlefield could be the victim of the resulting impunity. If the United States does not ensure that Syria faces consequences for crossing the line, no one will, and the U.S. response should be strong enough to prevent Mr. Assad from committing further atrocities. “A lot of people think something should be done,” Mr. Obama said Friday, “but nobody wants to do it.” He would be right to conclude that, in such circumstances, the United States must.