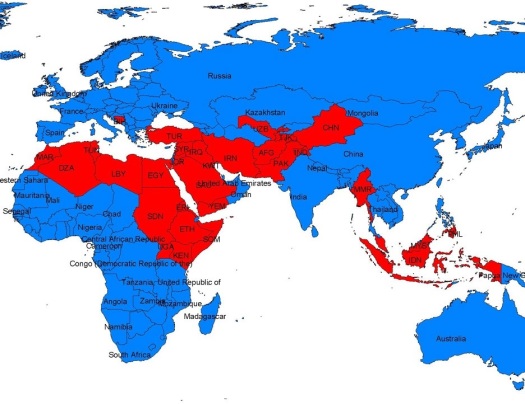 DeM Banter: I’m a simple man…but there are a couple big things at play here–first there is this internal issue in the US where we want it all to just go away… so we keep saying it has. The enemy always has a say in any conflict, just because WE say the war is over–doesn’t necessarily mean it is–the enemy is still voting…and I am thinking they are voting NO…the war is not over. Second is the toothpaste theory…something that dawned on me while I was deployed last. When we squeeze the tube….the toothpaste goes somewhere…it does not just disappear (well until it leaves the tube, but come on…give me a break). When we apply pressure to Al Qaeda they go somewhere. They know no borders, they just need a dark corner (failed state) to hide in. Finally, welcome to the information revolution. We are still fighting an Industrial Age war against an Info Age enemy… WE need to adapt. The Info Age might seem very dated until one looks at history and realizes the Industrial Revolution is figured to have started in 1760 and ended in 1840 only to have the second Industrial Revolution in the 1860s thru 1914. Most figure the Info Revolution stated in the late 1970s….and here we are some 30-40 years into it…just wait…there’s more coming. Now…ponder what the Industrial Rev did to warfare…from rifled barrels, to tanks, to aircraft, and eventually even nuclear weapons. What has the info rev done to warfare? Do we know yet? Al Qaeda?
I need more coffee…

Al Qaeda is a group that prizes symmetry and symbolism. When I interrogated Osama bin Laden’s personal propagandist and secretary, Ali al Bahlul, at Guantanamo Bay in 2002, he confessed that they take great care with timing to ensure maximum publicity. So it comes as no surprise that U.S. intelligence recently intercepted communications among senior al Qaeda operatives suggesting that they are planning attacks this month on embassies and other Western targets.

August is full of symbolic importance for al Qaeda. This week is the anniversary of the Aug. 7, 1998, twin bombings of the U.S. embassies in Kenya and Tanzania — al Qaeda’s first overt and successful attack against the U.S. August is also significant because during the last few days of Ramadan falls Laylat al-Qadr, or the Night of Destiny, which is when the Prophet Muhammad is said to have received the first of his divine revelations.

The reasons why this period is auspicious for al Qaeda are clear. What should be questioned is why, more than a decade after the attacks of Sept. 11, 2001, al Qaeda is still deemed to have high enough capability to force the U.S. to close its embassies and consulates. This seems to be at odds with America’s military and counterterrorism successes, and with the declarations of U.S. officials, including President Obama, that al Qaeda has been nearly destroyed.

The disconnect lies in our failure to appreciate that while al Qaeda central has been badly weakened by U.S. counterterrorism efforts, the group was never close to being extinguished. It adapted. It gave greater power to semi-independent affiliates, such as al Qaeda in the Arabian Peninsula, or AQAP, and to more loosely connected groups, like Boko Haram in Nigeria.

The West made the mistake of failing to effectively tackle these affiliates and their propaganda, dismissing them as local problems irrelevant to the war against al Qaeda. While groups like AQAP and Boko Haram initially did focus their violence locally, terrorists who endorse Osama bin Laden’s jihadist message inevitably move on to the global war against the West. That’s a key lesson that I and my colleagues in law-enforcement and intelligence learned by tracking al Qaeda in the 1990s.

Bin Laden himself started out by focusing on a local issue: U.S. troops in Saudi Arabia, his homeland. Initially the FBI and others in the intelligence community had to battle higher-ups eager to ignore him. He was “just a Saudi financier,” we were told.

Over the past seven years, AQAP has very effectively pursued a populist course in Yemen. The group has focused on populations in the south and east of the country long ignored by the ruling elite of the north, providing them with social services, such as teachers, and much-needed water. This has proved a savvy method for recruiting new members eager to attack Western targets. AQAP is at the center of increased threats against U.S. interests: On Wednesday, the Yemeni government, aided by U.S. drone attacks, reportedly foiled AQAP plots to take over strategic ports and to attack oil pipelines.

Because the connection between al Qaeda and its affiliates was neglected by the West, these terror groups have thrived. So despite all the successes in the war on terror, al Qaeda has maintained a steady stream of new recruits, replacing the members that have been killed or captured by the U.S.

Al Qaeda has also been greatly helped by the Internet and social media, which enables recruitment to take place in chat rooms rather than just in underground guesthouses. The narratives used by al Qaeda and its affiliates all follow the same pattern: Recruiters prey on local grievances, young men’s lack of purpose, and their feelings of anger, humiliation, and resentment. The recruiters combine this with distorted religious edicts, along with conspiratorial messages that blame the U.S. and the West for their problems. With these seemingly clear explanations for their problems, recruits feel empowered and embrace the jihadist mission.

The al Qaeda ideology — blaming the West for the Muslim world’s problems, rejecting anyone who doesn’t follow al Qaeda’s specific beliefs and claiming that terrorism is the only way to deal with opponents — was previously found mainly in the Persian Gulf and Afghanistan. Now it has spread, from West Africa to Southeast Asia. Combating the group’s ideology in an effective manner has been the weak link in the West’s counterterrorism strategy.

How to combat al Qaeda’s recruiters? Give vulnerable communities the proper tools to stand up against the group and its affiliates. This means not only military and intelligence aid from the U.S., but also targeted educational tools to rebut false religious messages. The West also needs to provide political and economic support, tailored to counter the power vacuums that terrorists exploit.

Last week, according to press reports, al Qaeda leader Ayman al Zawahiri promoted Nasser al Wahishi — a one-time bodyguard for bin Laden and later head of AQAP — to be al Qaeda’s general manager. Al Wahishi had been arrested by the Yemenis in 2003 as part of a U.S. offensive to disrupt an al Qaeda plot to bomb the U.S. Embassy in Sanaa and to assassinate the American ambassador.

In February 2006, al Wahishi and 22 other prisoners escaped from a maximum-security Yemeni jail by digging a 140-foot tunnel to the women’s bathroom of a nearby mosque. Among the escapees was Jamal al Badawi, who is on the FBI’s most-wanted list for his role in the October 2000 bombing of the USS Cole, which killed 17 American sailors. That 2006 escape was a turning point for the group. Al Wahishi and AQAP have been responsible for several attacks in Yemen, including one in 2008 on the U.S. Embassy in Sanaa, killing 19 people.

To top it all off, al Qaeda’s ranks have also been bolstered in recent weeks by brazen, large-scale prison breaks linked to the group in Iraq, Libya and Pakistan. Reports estimate that as many as 500 inmates escaped in Iraq, 1,000 in Libya and 248 in Pakistan.

The U.S. and others governments have been right in recent days to declare a high terror alert and to close embassies. But it shouldn’t have come to this. Until the U.S. starts combating the narratives that allow al Qaeda and its affiliates to continually recruit and retain members, these types of shutdowns and panics will become more routine.

Mr. Soufan, an FBI supervisory special agent from 1997 to 2005, is chairman of the Soufan Group, a strategic intelligence consultancy. He is the author of “The Black Banners: The Inside Story of 9/11 and the War Against al Qaeda” (Norton, 2011).