DeM Banter:  I came across this article about a month ago… and I keep finding myself pondering it. I encourage you to read the entire piece as I have only placed the pieces I keep reflecting on below… interesting….there is OH SO MUCH to learn if we would just acknowledge history as a teacher…perhaps not the only teacher, but indeed one worth listening to… “honor, fear and interest.” 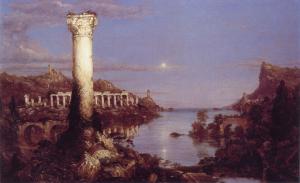 “Maybe it’s had its day. Democracy may have had its day. Concerns about the decline of liberty in our whole polity is what threatens all of the aspects of it, including democracy.”

Taking a grim view of the Periclean era in Athens, Plato and Aristotle believed that democracy inevitably led to tyranny. The Founding Fathers took on their criticism and strove to balance liberty with equality under the law. Mr. Kagan, who grew up a Truman Democrat, says that when he was young the U.S. needed to redress an imbalance by emphasizing equality. The elite universities after the war opened to minorities and women, not to mention Brooklyn College grads like himself—then “it was all about merit,” he says.

In the decades since, faculties have gained “extraordinary authority” over universities, Mr. Kagan says. The changes in the universities were mirrored in the society at large. “The tendency in this century and in the previous century at least has been toward equality of result and every other kind of equality that could be claimed without much regard for liberty,” he says. “Right now the menace is certainly to liberty.”

Whether democracy or war are the topics of discussion, Mr. Kagan can offer examples from the ancients. His lifelong passion is Thucydides and the Peloponnesian War—the epic clash between those former allies, militaristic Sparta and democratic Athens, that closed out the fifth century B.C.

As Thucydides wrote, people go to war out of “honor, fear and interest.” War, he also said, “is a violent teacher.” Another enduring lesson from him, says Mr. Kagan, is “that you can expect people, whatever they may be, to seek to maximize their power”—then a slight pause—”unless they’re Europeans and have checked their brains at the door, so mortified are they, understandably, by what happened to them in the 20th century. They can’t be taken seriously.”

These days the burden of seriousness among free states falls on America, a fickle and unusual power. The Romans had no qualms about quashing their enemies, big or small. While the U.S. won two global conflicts and imposed and protected the current global order, the recent record shows failed or inconclusive engagements in the Middle East and Afghanistan.

Some would argue that free societies are too soft to fight brutal wars too long. Mr. Kagan offers culture and political leadership as an explanation. “We’re a certain kind of culture which makes it hard for us to behave rationally when the rational thing is to be tough,” he says. “We can do it when we’re scared to death and there seem to be no alternatives. When it’s time to nail down something, we very often sneak away.”

The protection and distance offered by two oceans gives America the idea—or delusion—of being able to stay out of the world’s problems. Mr. Kagan also wonders about possible “geocultural” shifts at play. A hundred years ago, most people worked the land for themselves. Today they work for a paycheck, usually in an office. “Fundamentally we are dependent on people who pay our salaries,” says Mr. Kagan. “In the liberal era, in our lifetime, we have come more to expect it is the job of the government to provide for the needs that we can’t provide. Everything is negotiable. Everything is subject to talk.” Maybe that has weakened the American will.

With the end of the Iraq and Afghanistan wars, the U.S. is slashing defense again. “We do it every time,” Mr. Kagan says. “Failing to understand the most elementary childish fact, which is: If you don’t want trouble with somebody else, be sure he has something to be afraid of.”

Brownsville, not Thucydides, taught him that. “Any kid who grows up in a relatively tough neighborhood gets quick early lessons in what the realities are,” he says. His 1995 book, “On the Origins of War,” made a moral and strategic case to exert as much effort and money to safeguard peace as to win a war.

Thucydides identified man’s potential for folly and greatness. Mr. Kagan these days tends toward the darker view. He sees threats coming from Iran and in Asia, yet no leadership serious about taking them up. The public is too ignorant or irresponsible to care. “When you allow yourself to think of it, you don’t know whether you are going to laugh or cry,” he says.

The Kagan thesis is bleak but not fatalistic. The fight to shape free citizens in schools, through the media and in the public square goes on. “There is no hope for anything if you don’t have a population that buys into” a strong and free society, he says. “That can only be taught. It doesn’t come in nature.”

Mr. Kaminski is a member of the Journal’s editorial board.

A version of this article appeared April 27, 2013, on page A11 in the U.S. edition of The Wall Street Journal, with the headline: ‘Democracy May Have Had Its Day’.