DeM Banter:  I am always fascinated with future thought… part of the reason I love The Next 100 Years by George Friedman.  Some strong thoughts here, I have only posted Robert Kaplan on Global Conflict but there is a link below to all these thought leaders. 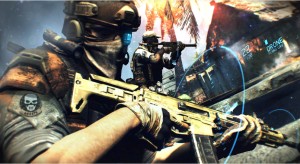 Put yourself back in 1993. Could you have predicted the success of the web, tablets and smartphones, privatized space travel, the rise of terrorism, or the myriad of small changes that impact how you live today? To do that going forward and to predict our world in 2033, you need the voices of the smartest minds on the planet to spot trends in their areas of discipline and give us insight into where we are heading. Interviewed, and quoted directly for this piece are just such a group of visionaries, leaders, and big thinkers like:

Whether you just read your favorite author, research your area of interest, download the supplemental deck, or view them all together, you will see that these visionaries agree on two things: there will be change – sometime dramatic change – in our future, and there is . . . hope.

“In 2033, global conflict will be widespread and chaotic, but not necessarily more violent. Rather than the post-Ottoman state system in the Middle East with hard borders and suffocating central control, there will be a series of weak states and sectarian and ethnic regions in tense relationships with each other. For example, Mosul in Iraq will have more in common with Damascus in Syria than with Baghdad, even as Aleppo in Syria has more in common with Baghdad in Iraq than with Damascus itself. There will be an independent and decentralized Kurdistan, a more feisty ethnic Azeri region in northwestern Iran, even as Jordan and the West Bank meld together.

In China there will be an ethnic-Han island in the center and Pacific coast living in reasonable harmony with virtually independent Inner Mongolia, Muslim-Turkic Uighurstan, and Tibet. Chinese Yunnan will be the capital of Southeast Asia. Africa will have a green revolution, while at the same time Nigeria pulverizes into several pieces.

In short, the next few decades will see the erosion of central authority in the former colonial world, which will be somewhat violent at first, before settling down into a reasonable harmony. Geography will be more crucial than ever, even as technology makes the earth smaller and more claustrophobic.”

Robert David Kaplan is an American journalist, (currently a National Correspondent for The Atlantic magazine), chief geopolitical analyst at Stratfor, and author “The Revenge of Geography.” For additional insights, go to www.RobertDKaplan.com.