DeM Banter:  The continued RISE of the drones… my crystal ball says… there will be a lot more of this as we attempt to drive costs down…not that there is not an initial huge cost in these robots, but over time… savings could be realized, but what does that do for the ethics of war?  There are so many deeper issues that must be pondered (Or maybe it is just me?).  Thoughts?

The U.S. military already has robotic planes, but the NUWC-4 is the Navy’s first robotic surface ship capable of maritime warfare. 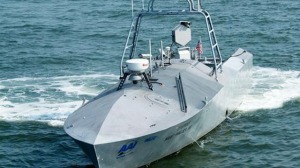 Future commanders might hunt for Robot October, now that the Navy has developed a fully automated missile-launching boat.

Navy personnel at the Patuxent River base in Maryland fired six missiles remotely from an unmanned boat off the state’s coast late last month.

“It does show a great step forward in capabilities,” Mark Moses, program manager for this test at Naval Special Warfare, told the Daily News.

“It can be used in harbor defense … The system could also be used for engaging targets outside of normal cruiser weapon range.”

The anti-armor missiles, developed by Rafael Advanced Defense Systems, lock onto targets with electro-optic and infrared sensors. Navy personnel can control each weapon’s trajectory midflight thanks to a special video system that lets them see right through the missile, explained David Jardot, program manager at Naval Undersea Warfare Center.

“Once you fire, you’re driving that missile through the fiber optic cable onto the target and adjusting it as you need to,” Jardot said.

The weapon system could decrease the number of attacks against other Navy ships, according to Moses.

For instance, it might have been able to stop the bombing of the Navy destroyer Cole if it had robotic boats back in 2000, according to Moses.

“Having an unmanned service vehicle out there that could have interceded before the bomb got as close as it did would have helped prevent that situation,” said Moses.

This cooperation, Moses said, is indicative of the Navy’s recent operations.

“We had a lot of people in play here,” Moses said. “This is a pretty advanced system and we are very proud of it.”