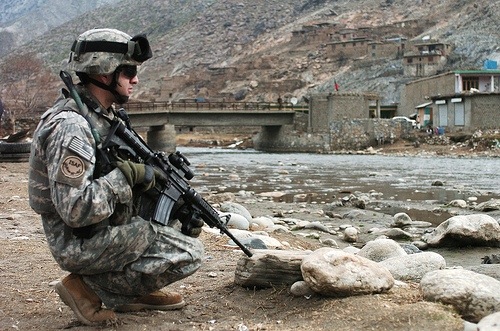 DeM Banter: a fan of Nagl…although I know some are not. Valid points although very Army centric, and perhaps to be expected, not sure I see much of an argument…except stay. So, is he arguing for…or against the 2014 date set by the Administration? I have not had enough coffee yet this AM, could be missing the big rocks.

Americans haven’t lost a war in so long, we’ve forgotten what doing so looks like — and what it costs. The only war that we undeniably lost was the Vietnam War; thrown out of the country literally under fire, we abandoned our allies to a horrific fate and left behind a legacy of terror in the region, breaking our Army in the process.

Despite the miasma of discontent with the effort, the United States and its many allies are not losing in Afghanistan. The spate of “green on blue” killings of U.S. soldiers by members of the Afghan security forces — some Taliban infiltrators, but mostly disgruntled or frustrated Afghans after a decade of foreign occupation — is a serious threat to our partnership strategy. After a temporary stand-down, to allow reactions to cartoons and videos caricaturing the prophet Muhammad to pass, joint patrols have resumed. We are proceeding with our plan to hand over primary responsibility for security to the Afghans by the end of 2014.

This will allow the United States to accomplish our national security objectives in the region: defeating al-Qaeda; preventing al-Qaeda and its affiliates from establishing permanent bases in Afghanistan and the tribal regions of Pakistan; and maintaining our own bases in the region from which to operate drones, manned aircraft and Special Operations forces. Calls for a more rapid and complete withdrawal ignore the geopolitical realities and threats that first led to U.S. intervention after the Sept. 11 , 2001, attacks — and that will continue to require armed U.S. assistance for decades to come.

Put simply, stability in Afghanistan and Pakistan matters to the United States. Pakistan is the most dangerous country in the world for U.S. interests. It is afflicted by multiple insurgencies, including radical Islamists in its security forces. There are serious security concerns about its nuclear stockpile, which is the world’s fourth-largest and fastest-growing. And it has the worst proliferation record of any nuclear power. Pakistan’s government and security forces have proven unwilling or unable to stop the infiltration into Afghanistan of insurgents based within its borders. Pakistan is the core problem in the region; the George W. Bush and Obama administrations have chosen to cooperate with Pakistan and wage an undeclared war within its borders rather than engage in open war with a nuclear power. Cooperating with Pakistan to the extent that Islamabad is willing to do so is unpalatable — but all of the alternatives are worse.

We will bear the heavy burden of the war in Afghanistan and Pakistan for years. U.S. soldiers will continue to serve in the region, assisting Afghan (and sometimes Pakistani) security forces against threats to the stability of both nations, conducting raids on insurgents and terrorists and preventing a broader war in South Asia. This is what success looks like in such wars.

U.S. forces continue to perform similar functions in countries around the globe where we have fought and won our wars; they remain stationed in Germany, Italy, Japan, Korea and Bosnia. They will remain in Afghanistan as a sign of our continued vital interest in the region, which remains ground zero for global terrorism and nuclear proliferation, the most dangerous threats to U.S. security in this century.

There are no U.S. forces stationed in Vietnam. We lost that one.

In addition to the geopolitical costs of failure, losing a war also breaks an army. By the conclusion of the Vietnam War, the U.S. Army was a drug-riddled and undisciplined force incapable of serving our nation under fire. Today, our Army is the most combat-experienced in American history. When the all-volunteer force was created in the waning days of Vietnam, no one could have predicted that it would survive more than 11 years of continuous war; that it has endured and, in many ways, grown stronger through this decade of conflict is a tribute to the Army’s leadership.

Even as the war in Afghanistan continues, all Americans must shoulder the responsibility to care for those who have borne the battle on our behalf. The nation has a sacred obligation to care for the widows and orphans and wounded veterans, binding their wounds, demonstrating our respect for those who have fought in this longest of all our many wars — one that is far more likely to end in success, even if it is an unsatisfying one, than in failure.

A friend of mine who fought in Vietnam and then helped rebuild the broken Army stayed in the service to see its triumph in Operation Desert Storm. He likes to say, “I’ve tried losing, and I’ve tried winning. Winning is better.”

Winning, or at least not losing, in Afghanistan, is certainly better than the alternative. It is worth remembering what losing a war looks like, and what it costs to lose a war, as the United States considers its political leadership and the way ahead in Afghanistan.

John A. Nagl is a retired Army officer, who served in both wars in Iraq, and a professor at the U.S. Naval Academy. He is the author of “Learning to Eat Soup With a Knife.”

2 Replies to “Why We Can’t Afford To Lose In Afghanistan By John A. Nagl”