Blogger’s note:  Still struggling with Policy vs Strategy….perhaps I am too narrowly focused on military strategy and not on spending strategy, but this is a spending policy with some strategic “guidance.”…. not sure there is a strategy to back up the spending end state.  Any thoughts? … Really like Haddick’s combination of history and current affairs. 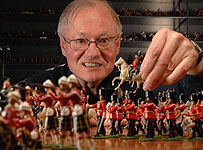 This Week at War

In my Foreign Policy column, I explain that although policymakers in Washington vow to avoid recreating the “hollow force” of the 1970s, they may get a hollow force anyway.

On June 10, The Hill‘s defense blog reported that a bipartisan group of 30 senators is meeting behind closed doors to discuss funding alternatives that would avert “sequestration,” an instant $55 billion cut to the Pentagon’s budget slated to occur on January 2, 2013. This 10 percent across-the-board cut to defense spending was originally designed to be such an unthinkable menace that it would motivate policymakers to come up with rational fixes to the federal budget. Whether the senators will be able to find a solution before January remains uncertain.

Even if President Barack Obama and congressional leaders can ward off sequestration, few believe that this will end Washington’s budget drama. The outcome of the November election will be crucial to future budget priorities. In the meantime, some defense analysts are already preparing for what may come even if sequestration is averted. Last January, Obama unveiled a new defense strategy, designed around $487 billion in cuts over the next 10 years. This strategy will lay off 100,000 soldiers and Marines over the next five years, cut nine Navy ships and defer or cancel the construction of 12 others, and eliminate six Air Force tactical fighter squadrons and scrap 130 cargo planes. But one new analysis, based on three other deep defense drawdowns that have occurred since World War II, suggests that Pentagon planners would be wise to get ready for cuts far beyond the $487 billion already factored into the military’s plans.

Part I of the report from the Center for Strategic and International Studies was released last month and discusses the assumptions and framework for their analysis. Part II will arrive in November and will present specific recommendations for restructuring U.S. military forces after assuming a one-third cut in defense spending between 2010 and 2024. The CSIS authors believe that regardless of how the 2012 and subsequent elections turn out, the pressure of fiscal austerity will remain. Further, they assume bargaining leverage among political parties and factions will remain sufficiently dispersed, such that bipartisan compromises on the large budget and tax issues will be required. The authors thus conclude that the Pentagon will have to endure cuts totaling $1.2 to $1.5 trillion between 2010 and 2024.

How should the Pentagon plan for triple the cuts currently contemplated while also minimizing the risks to U.S. security? Congress and Pentagon planners will have to apportion the reductions between the size of the military, the military’s current level of readiness for operations, and preparing for future risks.

In order to guide their analysis, the CSIS team studied the drawdowns that followed the Korean, Vietnam, and Cold Wars. The CSIS authors identified the post-Vietnam drawdown as perhaps the best example of what not to do. Pentagon funding declined by 33 percent, similar to what the authors assume will occur this time. But after Vietnam, Congress and the Pentagon retained far more force structure than they could properly afford. The result was the “hollow force.” Soldiers in the new all-volunteer force were poorly recruited and paid. Funds for training were inadequate and equipment maintenance was deferred. By 1979, 6 of 10 Army divisions stationed in the United States were assessed as “not combat ready.”

The authors found the post-Korea and post-Cold War examples somewhat better role models. After the Korean War, the Eisenhower administration performed a thorough analysis resulting in a significant cut to the Army’s force structure and a re-allocation of resources to the Air Force’s strategic nuclear deterrence mission and general research and development, then thought to be enduring U.S. strengths compared to the Soviet Union. After the Cold War, the military again chopped its force structure and procurement, while generally maintaining research funding. In both cases, the Army found itself unprepared for guerilla wars that were considered unlikely contingencies, until policymakers decided to engage in them anyway.

As they prepare their November recommendation, the CSIS authors are open about their “analytic bias.” They have already concluded that a much smaller force that is well equipped and well trained is far preferable to the large but “hollow” force the U.S. found itself with during the 1970s. As an example of this in action, this week was the 30th anniversary of the end of the Falklands conflict, which saw a small but elite British expeditionary force rapidly defeat a much larger but ill-equipped and ill-trained Argentine army.

The CSIS authors believe that history and logic justify their analytic bias favoring cuts to force structure while maintaining funding for readiness and R&D. However, political forces may spoil their plans.

The authors assume that U.S. leaders will shed low priority missions that aren’t essential to U.S. security. Although this assumption is critical to making the CSIS analysis work, it is questionable to count on enduring self-restraint by U.S. policymakers. Problems the CSIS authors would very likely view as non-essential — Lebanon in 1982, Somalia in 1992, Bosnia in 1996, Libya in 2011, to name only a few examples — resulted in U.S. military interventions. The CSIS authors are expecting future U.S. presidents to restrain themselves when confronted by similar problems in the future. A much shrunken force structure available to future presidents is expected to bolster this restraint. But the pressure to act will remain — even if the U.S. military is much smaller in the future. And with the CSIS assumption of at least $1.2 trillion in defense cuts borne mostly by force structure, we should expect that the force structure CSIS recommends in November to be very small indeed. Even though the CSIS approach specifically attempts to avoid a hollowed out force, this will very likely be the result anyway. CSIS’s small force, even if well-trained and well-equipped, will eventually wear out from excessive deployments and overwork.

Although the sorry experience of the 1970s hollow force should rationally exclude that course from consideration, political pressure may nevertheless result in its resurrection. Policymakers may conclude that they must maintain adequate force structure in order to cover the missions, essential and otherwise, to which the U.S. has obligated itself. In addition, leaders on Capitol Hill and elsewhere may opt to protect soldiers and their families from the pain of layoffs and from the impossible deployments schedules that would result from a much smaller force. But to balance the books, it will be tempting to nibble away at training budgets, spare parts, and corners of procurement that aren’t politically influential. Although policymakers will know that they are creating a hollow force over time, they may rationalize this by assuming that they will get adequate warning of a future crisis and be able to boost readiness as needed with some “just-in-time” injections of training funds. They will be playing a game of bluff, trading on the U.S. military’s past reputation and the difficulty of discerning just how hollow U.S. forces might actually be at a given moment.

The Obama administration believes that it is approaching the latest drawdown with a rational and deliberate strategy. Like the Eisenhower administration’s post-Korea strategy exercise, the Obama plan shifts resources from ground forces to air and naval power, which are perceived to be U.S. strategic advantages and the right tools for the current challenges in the Asia-Pacific region.

But this strategy may already be fraying at the edges. Although the strategy is designed to boost air and naval power, air and naval forces will still shrink. And although the Pacific is the strategy’s focus, the Pentagon will struggle to make a modest boost to its naval presence there. And this fraying is visible before either sequestration or CSIS’s forecast of further cuts occurs.

In its January strategic guidance, the administration admitted that its defense plans entail taking on more risk. These risks will include cutting ground forces too much, having inadequate forces for certain kinds of simultaneous crises, relying on what may end up being unreliable allies, and having over-optimistic assumptions about the Pentagon’s ability to regenerate forces in a crisis.

The CSIS deep drawdown project is an attempt to plan for a much worse budget scenario than the Pentagon is currently planning for. With its $1.2 trillion in assumed cuts, the CSIS-recommended force would still likely be too small to cover problems and allies that the U.S. has been used to covering for decades. If U.S. policymakers don’t want to accept that proposition, they may be tempted to bluff with a hollow force, as they have done in the past. But games based on bluffs and uncovered bets sometimes end abruptly.

Robert Haddick is Managing Editor of Small Wars Journal. He writes the “This Week at War” column for Foreign Policy. Haddick was a U.S. Marine Corps officer, served in the 3rd and 23rd Marine Regiments, and deployed to Asia and Africa. He has advised the State Department, the National Intelligence Council, and U.S. Central Command.

In the private sector, Haddick was Director of Research at the Fremont Group, a large private investment firm and an affiliate of the Bechtel Corporation. He established the firm’s global proprietary trading operation and was president of one of Fremont’s overseas investment subsidiaries.

In addition to Foreign Policy and Small Wars Journal, Haddick’s writing has been published in the New York Times, the Wall Street Journal, Air & Space Power Journal, and other publications. He has appeared in many radio and television interviews.