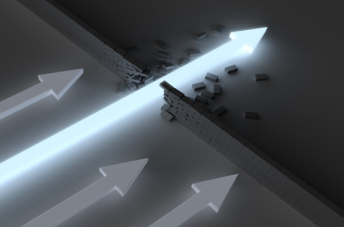 Are innovators born or made?  Surely, those who spawn ideas that change the world are special – different then the rest of us.

Take one look at an Einstein, a Henry Ford or a Steve Jobs and it seems that they were bequeathed with something unique.  They have a flair and a surety about themselves that borders on the sublime.
Yet many others also have flair and surety and never accomplish anything of note. Moreover, as I’ve written before, stories of great innovators often contain struggle and privation.  Given a deeper look, innovation seems more learned than innate and there is surprising consistency about what drives it.  Here are 5 principles to guide you.

Peter Drucker once wrote, “Effective innovations start small.  They are not grandiose.”  He’s right.  A small idea pursued rigorously is worth infinitely more than the pompous navel-gazing gurus and pundits seem to take so much delight in.

Take a look at any really, really big thing and, inevitably, it has modest origins.  Microsoft became one of the world’s most valuable companies by focusing on software, an area so inconsequential at the time that IBM was willing to write it off.  Apple made a splash with the Macintosh in large part by capitalizing on innovations that Xerox overlooked.

Yet, the great thing about thinking small is that you can risk failure, because failure is sustainable.  You can falter, pick yourself up and try again.  Eventually you’ll get it right and when you do, there are no limits.  If you can suvive, you can thrive.

The absolutely worst thing you can do is pile on a bunch of up-front costs that push the break-even point far into the future.  Most likely, that day will never come.

Ever since Clayton Christensen published The Innovator’s Dilemma, the idea of disruptive innovation has become super sexy.  And why not?  What’s more exciting than a new idea coming out of nowhere to upend an entire industry?

What people tend to miss (surprisingly few who blather on about the subject actually have read Christensen’s work) is that disruptive innovation is crappy.  It targets light or non-consumers who are over-served by an existing product or service.  They’re more than happy to something inferior by conventional standards but superior in some other way.

Tim Kastelle, a professor who studies innovation gives a great example involving Canon and Ricoh, who almost put Xerox out of business by selling inferior copiers that were smaller and cheaper.  However, they were “good enough” for most businesses and so size and price won out.  From there, performance improved and Xerox was toast.

That’s why disruptive innovations like digital cameras and mini-mills were so easy for incumbents to overlook.  The existing customer base wasn’t interested in them at first. However, the innovations won a following elsewhere, picked up steam and by the time the market leaders realized what was happening, it was too late.

While we like to think of innovators being lonely men on the mountain, only coming down, like Nietzsche’s Zarathustra, to proclaim great revelations, the truth is that important breakthroughs usually come from synthesizing ideas from different domains.

One famous historical example is that of the discovery of genetics.  In 1865, when Gregor Mendel published his groundbreaking study of inheritance of characteristics in pea plants, it went nowhere.  It took nearly a half century before the concept was combined with Darwin’s natural selection to unleash a torrent of innovations in medicine and science.

In a similar way, Einstein merged physics with Humean skepticism to come up with relativity.  Watson and Crick weren’t the most accomplished scientists searching for the structure of DNA, but they were the ones that knew enough about the separate domains of biology, chemistry and physics to put the pieces together.

A more recent example is the Apple ecosystem.  There were plenty of digital music players around when Steve Jobs launched the i-Pod, but he combined his player with i-Tunes, which made content both more accessible and palatable to music companies.  He then threw new products into the mix – the i-Phone, i-Pad and now Siri – creating more combinations and greater value.

4. Passion and Perseverance Are Key

The problem with combinations is that finding the right ones takes time.  Larry Page and Sergei Brin combined the system of academic cites with computer technology to develop the world’s greatest search engine.  However, it was years before they stumbled upon Overture’s business model and found the combination that actually made money.

Spending years in the wilderness before becoming a runaway success is not at all uncommon.  As Jim Collins noted in Built to Last, Sony started out as a failed rice cooker manufacturer.  Hewlett Packard began by making quirky gadgets like automatic toilet flushers and a machine shocked people to help them lose weight.

Jeff Bezos emphasized the importance of perseverance in Amazon’s success in a recent interview.  He said that, “We are stubborn on vision. We are flexible on details. … We don’t give up on things easily.” A lot of times, what looks like brilliance is really just someone who has the balls to stick it out through years of failures.

As I’ve said before, we’re not just competing in an information economy, but a passion economy. Game changing breakthroughs are love children, not test tube babies.

Of course, beyond all the happy talk, businesses must do more than just innovate.  They need to serve customers, pay employees (and sometimes congressmen) and earn money. So prattling on about embracing creativity and failure often gets thrown to the wayside when it’s time to make budget. 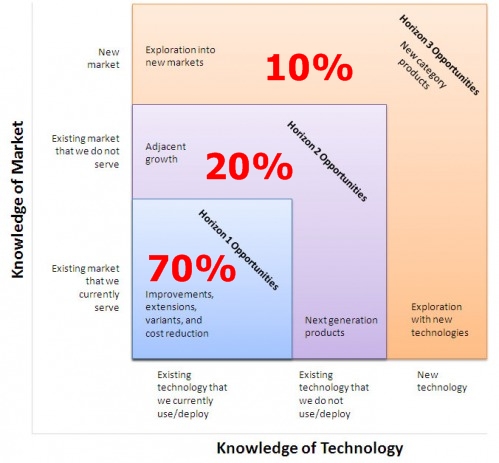 Now, professor Kastelle is a learned sort and you can find his intelligent explanation on the link I provided above.  However, I’m from Philadelphia, so I just like to think of it as:

– You want to put 10% of you innovation efforts toward creating something new and cool.

In any case, the point is that it’s the mundane stuff that makes breakthrough innovations possible.  Without that, you just have a bunch of wild ideas that you’ll never be able to see through.  If today’s problems aren’t solved there will never be any future to invent.

3 Replies to “5 Principles of Innovation by Greg Satell”