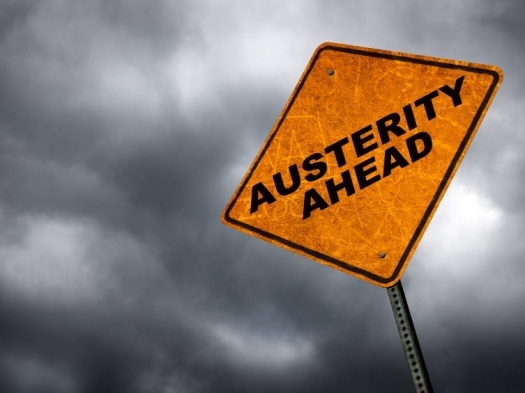 This Week at War

In my Foreign Policy column, I apply CSBA’s latest report on coping with defense austerity to the Pentagon’s current predicaments.

The reality of defense budget “sequestration” — the threat of an across-the-board 10 percent cut to most of the Pentagon’s spending accounts — is now beginning to rattle policymakers in Washington. This week, Sen. Lindsey Graham (R-SC) called on defense contractors to issue hundreds of thousands of layoff notices to their workers, as a statute requires them to do 60 days before plant closings occur. Graham’s openly expressed intent was to create political pressure on Congress to avert sequestration. Pentagon officials, who have so far refused to discuss any details concerning sequestration, may now be starting to open up a little. Defense Secretary Leon Panetta has recently met with defense industry executives to discuss their plans for sequestration.

In a recent column, I discussed one effort to cope with defense cuts triple the size of those that have already been imposed. That analysis attempted to fashion a rational balance among cuts to force structure, modernization, readiness, and research spending.

The Center for Strategic and Budgetary Assessments (CSBA), a defense think tank, recently submitted its own advice to struggling policymakers, “Strategy in Austerity,” which examines two case studies of leading global powers coping with relative decline while facing a rapidly rising competitor. At the turn of the twentieth century, the British Empire was passing its peak just as Kaiser Wilhelm’s Germany was rapidly ascending and asserting its strength. And in the 1970s, the United States had to deal with its failure in Southeast Asia and political and economic turmoil at home just as Soviet military power was swelling. The authors extract seven strategies policymakers in these two cases used to cope with the geostrategic challenges they faced.

The seven strategies include not only defense reforms but also diplomatic gambits and calculated risk-taking. How might the current generation of U.S. policymakers apply each of these strategies?

In the decades before World War I, Britain employed a new diplomatic strategy that outsourced a portion of its security burden to new allies and partners. France and Russia, formerly long-time rivals, became Britain’s partners in an attempt to match Germany’s growing power. In the 1970s, Richard Nixon, Gerald Ford, and Jimmy Carter developed an increasingly deep relationship with China in an effort to balance the Soviet Union and complicate its defense planning. Today, U.S. policymakers hope that a deepening relationship with India will offset China’s growing influence and also help stabilize Afghanistan during the second half of the decade. U.S. policymakers are also counting on America’s extensive network of alliances and partners in the western Pacific to share the security burden and provide diplomatic synergy against possible Chinese assertions.

In the 1970s, the United States negotiated with its principal rival, the Soviet Union, in an attempt to stabilize a strategic nuclear arms race. The resulting agreements on offensive nuclear forces and missile defenses possibly freed up some resources the Pentagon might have otherwise been forced to spend keeping up with expanding Soviet missile arsenals. If so, the United States benefited from these negotiations by having more funding for research on stealth aircraft technology and precision-guided munitions, which would later become substantial U.S. advantages. The United States and China might, in theory, find it economical to negotiate a halt to the escalating Pacific arms race. Regrettably, the track record of such attempts is poor, most often because one side sees a comparative advantage in weapons production.

The Pentagon will no doubt continue its perennial quest to employ defense resources more efficiently. At the turn of the twentieth century, Britain instituted substantial money-saving reforms to both its navy and army. The Royal Navy retired 150 obsolete ships that institutional interests had previously protected. A new manpower plan retained only skilled sailors on active service and relied on quickly filling unskilled crew positions after wars broke out. After the draining Boer War in South Africa, the British Army saved money by increasing its reliance on a reformed reservist system. Some defense analysts similarly believe the Pentagon could save money by shifting much of its ground combat power, especially tank-heavy units, to the reserves — since these are the forces least likely to be needed on active duty after the withdrawal from Afghanistan in 2014. As for finding savings in the rest of the Pentagon’s sprawling bureaucracy, workers in the building regularly report sightings of waste, but somehow these ghosts always seem to elude the auditors.

Before World War I, the Royal Navy enhanced the effectiveness of its forces by successfully betting on some new technologies that allowed it to sustain its dominance over Germany’s rapidly growing fleet. These new technologies included big naval guns, oil-fired turbine engines, submarines, and a global communications system based on undersea cables and radios. Applying these technologies to new warships, the Royal Navy was able to increase its power even while it shrank its ship count and manning. In the 1970s, even in the face of restrained budgets, the Pentagon invested in research that led to stealthy fighter and bomber aircraft, a global satellite-based navigation system, and precision-guided weapons that threatened the Soviet’s numerical superiority. Over the past decade, improvements in surveillance drones, other intelligence-gathering techniques, and intelligence analysis software has allowed the United States to improve the effectiveness of its counterterrorism and man-hunting efforts. In the future, troops will be counting on scientists to master directed energy, cyber, and electronic warfare weapons to counter the rapid proliferation of precision-guided weapons in the hands of adversaries.

Some procurement strategies use comparative advantages to impose costs on an adversary. The CSBA authors note that Britain’s shipbuilding industry before World War I was superior to Germany’s. Germany was foolish to attempt to match Britain’s shipbuilding program, but did so anyway. In the 1970s, the United States upgraded its bomber force with investments in long-range cruise missiles and tools to suppress enemy air defenses. These investments forced the Soviet Union to pour more money into its air defense system, which was tasked with defending a 12,000 mile border. Today’s drone campaign hopes to force terrorist adversaries to spend all of their resources on survival rather than planning future attacks. As mentioned above, U.S. defense planners hope that advantages in electronic warfare and directed energy weapons will ruin the investments adversaries are making in guided missiles.

During a period of austerity, policymakers will have to take risks and shed low priority commitments. The Royal Navy made a successful gamble on new warship technology, just as did the Pentagon with its bets on stealth aircraft technology and precision-guided weapons. Today, the Pentagon has placed a huge wager on the troubled F-35 Joint Strike Fighter program, which is horribly over budget and very late arriving into service. To cover the unplanned gap until the F-35 is operational, the U.S. Navy wants to continue buying the legacy F-18 fighter-bomber for its aircraft carriers. At the risk of not having enough naval air power for a contingency that occurs over the next few years, the Pentagon could save money by forcing the Navy to wait for the F-35 to arrive later. Beyond that one example, the Pentagon’s defense guidance released in January acknowledges numerous other such risks it is accepting with a more austere budget. These risks include insufficient ground combat power later this decade and the inability to cope efficiently with certain combinations of simultaneous crises.

The ultimate risk is a breakdown in deterrence, induced by a perception of weakness brought on by defense austerity. Whether such a perception played a factor in the Soviet decision to invade Afghanistan in 1979 remains open for debate. There is no question that that move, combined with the Islamist takeover of Iran at the same time, resulted in the beginning of a defense buildup in the United States, begun by President Jimmy Carter and rapidly expanded by the Ronald Reagan administration. That leads to the CSBA’s final strategy: increase defense spending as necessary, and impose austerity elsewhere. As U.S. diplomats meet with their counterparts around the world, they will have to assess to what extent U.S. plans for defense austerity are inducing hedging behavior by allies and aggressiveness by adversaries. U.S. defense planners may legitimately believe that a $487 billion cut over 10 years adds only a minimal and acceptable level of risk. But friends and adversaries get their votes and their opportunities to miscalculate. U.S. diplomats and policymakers should pay attention to the responses they hear and ensure that austerity today does not lead to something much more expensive later.

Robert Haddick is Managing Editor of Small Wars Journal. He writes the “This Week at War” column for Foreign Policy. Haddick was a U.S. Marine Corps officer, served in the 3rd and 23rd Marine Regiments, and deployed to Asia and Africa. He has advised the State Department, the National Intelligence Council, and U.S. Central Command.