DeM Banter: If you want to win big… ya gotta bet big!  Can you even imagine?  Scare tactic? I had heard the KC10 was on the chopping block…that would go along with all the other airframes I have touched…”Snake” DeMarco… no more C-23, C-12, C-141, KC-10s should be next. The real issue is we can’t just keep trimming the edges…there are no edges left–now we have to start removing arms and legs.  The KC10 might be replaced with the KC46, the A10 by the F35, the F15 by the F22 and 35.  There will be a HUGE gap in capability while we wait for those systems to come on line.  I guess it is good the world is so peaceful right now. Like we always say… it is all about choices… and what could POSSIBLY go wrong? 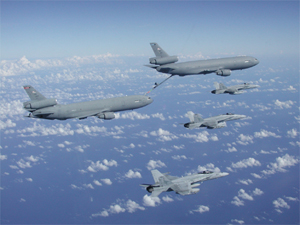 WASHINGTON — Faced with steep budget cuts and the desire to keep existing procurement initiatives on track, the US Air Force is considering scrapping its entire fleet of KC-10 tankers and A-10 attack jets, according to multiple military and defense sources.

Also on the chopping block are F-15C fighter jets and a planned $6.8 billion purchase of new combat search-and-rescue helicopters, these sources say.

While these proposals are far from final, the options show the magnitude of the decisions facing Air Force leadership as the service wrestles with the prospect of cutting billions of dollars in planned spending over the next decade.

“You only gain major savings if you cut an entire fleet,” Gen. Mark Welsh, Air Force chief of staff, told sister publication Air Force Times last week. “You can cut aircraft from a fleet, but you save a lot more money if you cut all the infrastructure that supports the fleet.”

When directly asked about phasing out the A-10 fleet, Welsh declined to comment on specific aircraft.

“We are looking at every platform we have, every one of those five core missions and trying to decide where must we recapitalize versus where can we modernize,” Welsh said.

The Air Force’s 2015 spending plan is due to the Office of the Secretary of Defense (OSD) by Sept. 23.

Each US military service is developing two budgets for 2015 — one that includes sequestration spending cuts and another that builds on the Pentagon’s 2014 budget proposal, which is $52 billion above the sequestration cap.

OSD must approve the services’ budget proposals during a series of back-and-forth deliberations in the coming months before a final spending plan is sent to lawmakers in February.

In an emailed statement, Air Force spokeswoman Ann Stefanek said no decisions have been finalized.

“As the Air Force plans for a future with sequestration, we are looking at all options to accomplish our mission within available resources,” Stefanek said. “At this time, all options being considered are pre-decisional.”

The four-month-long Strategic Choices and Management Review — a DoD effort that looked at ways the Pentagon might have to modify its military strategy due to budget cuts — found the Air Force could cut up to five tactical aircraft squadrons, DoD announced in July.

The proposed aircraft cuts, particularly the 340-aircraft A-10 fleet, are sure to face scrutiny in Congress. About half of the A-10 fleet resides in the Air National Guard. An Air Force proposal to cut five A-10 squadrons last year faced stiff opposition in Congress and from state governors.

The Air Force Reserve also operates A-10s, which were heavily used to provide support to ground troops in Afghanistan and Iraq. A-10s also are based in South Korea.

Sources say the Army is interested in obtaining A-10s should the Air Force decide to retire the twin-engine jets, which have been flying since the 1970s.

The Air Force operates 59 KC-10s, according to a service fact sheet. The tri-jet, which is based on the commercial McDonnell Douglas DC-10 jetliner, is the workhorse of the Air Force aerial refueling fleet.

The tankers — equipped with both boom and hose-and-drogue refueling systems — can refuel Air Force, Navy and international military aircraft on a single sortie.

Also on the table is an unspecified number of cuts to the Boeing F-15C Eagle fleet. The Air Force has about 250 of the fighter jets, which, along with the F-22 Raptor, make up the service’s air-to-air fighter arsenal.

Pentagon leaders for several years have said they would like to get rid of single-mission platforms.

An Air Force plan to cut the A-10 doesn’t come as a surprise, said Richard Aboulafia, an analyst with the Virginia-based Teal Group. He said the active service has been trying to kill off the platform for years. But while congressional pressure has saved the planes in the past, budget realities may make cuts realistic for the first time.

“These are strange and dangerous times budgetarily, which means the Air Force might finally get their way,” Aboulafia said. He pointed out that the A-10 is not particularly useful for either counterinsurgency actions or for the so-called pivot to Asia, leaving the platform strategically on the outside looking in.

“If there were any plans to fight a land war, this would not be good news. But everything about the budget implies they have stepped away from land wars,” he said. “It’s a good way for the Air Force to save cash and declare victory in a turf war.”

Conversely, Aboulafia calls the potential KC-10 cuts “a baffler,” citing the relatively young age of the aircraft and its importance for movement across the Pacific. He speculated that including the KC-10 may be the Air Force attempting to drive home the impact of sequestration and budget cuts, as the program still provides a number of jobs that members of Congress would want to protect.

Retiring the F-15C would save maintenance and upgrade costs, Rebecca Grant, president of IRIS Research and a former USAF official, said. The service could then use those funds to speed procurement of the F-35 Joint Strike Fighter.

“It’s a gutsy move assuming a lot of risk, but there’s risk to all these scenarios,” Grant said. “It may be there is less risk retiring the F-15C right now than there is in getting the fleet we need some years down the road.”

Air Force leaders are still locked in a passionate debate over whether to move aircraft and personnel into the Guard and reserve. Advocates for this move say the savings achieved could allow the Air Force to keep aircraft in the inventory.

While the Air Force sequestration budget proposal cancels the Combat Rescue Helicopter (CRH) program, a separate 2015 budget proposal — the one that builds on the Pentagon’s 2014 budget plan — funds the effort, sources said.

Sikorsky is the only company to publicly announce a bid in the CRH program. A contract award was expected this month, but has been pushed to the first quarter of fiscal 2014, which begins Oct. 1.

If CRH is canceled, the service could coast with its inventory of HH-60 Pave Hawks, perhaps with limited procurement to replace losses. Grant, however, cautions that could be a mistake.

“The Air Force needs [CRH], but it wouldn’t surprise me to see it flip,” Grant said. “We’ve taken risk in the helicopter fleet for close to a decade now, and it’s time to take the risk somewhere else. They need to get that one done.”

While many factors can change over the next five months of budget deliberations, the decision to abandon the service’s one-time No. 2 acquisition program shows the desire of Air Force leaders to protect procurement programs already in production or of higher priority, sources said.

Pentagon officials do not want to break the fixed-price tanker contract that requires Boeing to pay for development or production hiccups. The bomber is a key component in the Pentagon’s long-term, Pacific-focused strategy, and the F-35 is the only fifth-generation US combat fighter aircraft in production.

In the end, Congress will have the final say. Lawmakers were less than thrilled with the Air Force’s 2014 budget proposal, reversing several big-ticket items.

Jeff Schogol contributed to this report.