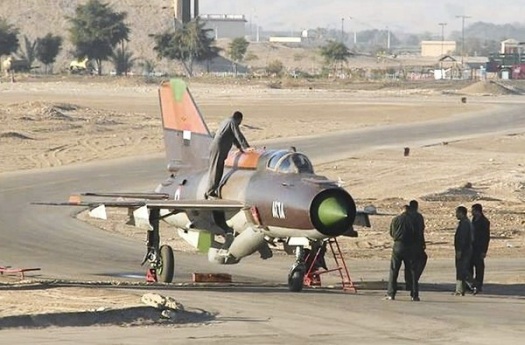 The Syrian air force is ‘this close to being defeated.’

President Obama said Thursday he hasn’t decided whether to attack Syria, adding that any strike would be a brief “shot across the bow” in response to the Assad regime’s use of chemical weapons. We can’t recall another President suggesting his goal was to miss his military target. But assuming he does want to hit something and have a military impact, our suggestion would be to take out the regime’s air force.

So far the debate over military intervention has been posed as a false choice: Either do the pinprick attack that multiple White House leaks seem to portend, or do a much larger intervention that means a long campaign and ever-deepening military commitment. The former won’t make much difference and might even strengthen Assad, while the latter is intended to frighten the American public into believing any intervention means another Iraq or Afghanistan.

The latter fear has been enhanced, regrettably, by the Administration itself and especially by the public declarations of Mr. Obama’s chief military adviser, Chairman of the Joint Chiefs Martin Dempsey. Asked in July by the Senate Armed Services Committee for a possible plan of action in Syria, General Dempsey sent a three-page letter that made any intervention seem both arduous and expensive.

His unclassified overview is so sketchy it’s hard to judge it in any detail. But its clear message is that any kind of air suppression campaign would cost about $1 billion a month, go on endlessly, and lead to a quagmire. Even a limited attack with standoff weapons that operate from a distance would require “hundreds of aircraft, ships, submarines, and other enablers” and “the costs would be in the billions,” the General wrote.

The analysis was so one-sided that if left Senators Carl Levin and John McCain notably frustrated. Given that General Dempsey is now planning the limited strike option he didn’t include when answering the Senate, it’s hard not to conclude that the General wanted to make any strike seem too costly to undertake. This politicized testimony has become a pattern with General Dempsey, who often sounds more like an Administration official than an independent military counsel.

Meanwhile, another analysis making the Pentagon rounds shows there is a more realistic military option. It comes from Christopher Harmer, a former Naval aviator now at the Institute for the Study of War, a Washington think-tank. The plan has been examined and broadly endorsed by retired four-star General Jack Keane, one of the architects of the 2007 “surge” that saved the day in Iraq.

Mr. Harmer starts with the proposition that the Syrian air force is far from mighty, with only 100 or so planes and perhaps only 50 of them still operational. They fly from only six major airfields controlled by the regime. “The Syrian air force is this close to being defeated,” he says, holding his thumb and forefinger an inch apart.

These columns have endorsed a no-fly zone in Syria, but Mr. Harmer says that isn’t necessary. Target those six airfields—their runways, bomb and fuel depots, control tower and radars—and you can essentially shut down the bombing raids that have so harmed the opposition. Going after the aircraft would also be desirable but is unnecessary if the Syrians can’t sustain flight operations. The U.S. might need to attack the airfields again if the Syrians are able to repair and rebuild, but similar sorties could do the job.

Even better, Mr. Harmer says all of this can be done by using standoff weapons like Tomahawk cruise missiles and air-to-surface missiles like the JASSM. No U.S. pilot would be put in harm’s way, since no aircraft would have to enter Syrian air space. The attack also wouldn’t require taking down Syria’s air defenses, which he says in any case are far less capable than advertised.

Every military operation has risks, and even in this scenario Syria and Iran could hit back at other U.S. targets, such as embassies, or at our allies. But the point of the Harmer analysis, says General Keane, is that there is a practical and limited military option that does serious damage to the regime’s capacity to wage war against its own people.

This in turn would level the battlefield for the opposition. The Syrian military strategy has been to spread terror by dropping bombs indiscriminately on rebel-held territory. The chemical attack in part of Damascus was merely an extension of that bloody strategy. The Harmer bombing plan would have even more impact if it were accompanied by arming moderate rebel groups, as the White House promised in June.

Which brings us back to Mr. Obama’s goal in striking Syria. So far, we’re told, the U.S. has provided no direct lethal aid to the rebels. We also hear the Saudis have been supplying less military aid than they otherwise would due to U.S. opposition. This suggests the Administration isn’t sure it wants to oust Assad from power.

If this is true, then a mere “shot across the bow” attack could leave Assad even stronger. He’ll know that he survived the “consequences” that Mr. Obama promised with only minimal damage. He’ll also know he can unleash his air force and perhaps even chemical weapons again with little chance of further U.S. military response. All the more so after Assad has watched the debate in Western capitals over even limited bombing, including Thursday’s defeat in the British Parliament.

A pinprick attack portends more months or years of civil war, leading to an eventual Assad-Iran victory or perhaps a divided country. The jihadist groups, now a minority in the opposition, will grow as the war drags on and they focus on holding territory rather than fighting the regime.

We’d support a larger military intervention aimed at regime change. Short of that, any U.S. military strike should focus on doing enough damage to the Syrian air force so the rebels can change the regime themselves.