DeM Banter:  Oh that pesky thing called history…it just keeps coming up again and again.  This sure is not easy…but we have to get bigger and ponder what will this look like in 3 to 5 to 10 years?  What do we want it to look like? Something we ponder in chapter 1 of Wondering Where The Lions Are….

“Strategy without tactics is the slowest route to victory. Tactics without strategy is the noise before defeat.” –Sun Tzu 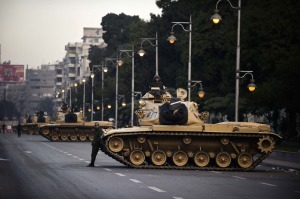 Prominent commentators, including Leslie Gelb, John Bolton and Bret Stephens, are counseling the Obama administration to swallow its qualms about the military coup in Cairo and embrace the generals as the best alternative to the Muslim Brotherhood. This is what might be called the “son of a bitch” theory of international relations, after the apocryphal comment supposedly made by President Franklin D. Roosevelt about Nicaraguan dictator Anastasio Somoza: “He may be a son of a bitch, but he’s our son of a bitch.”

This argument has some plausibility. There is no doubt that the United States derives strategic benefits from our alliance with Egypt’s generals — namely the upholding of the Camp David accords, transit rights in the Suez Canal and other forms of military and intelligence cooperation in the war on terrorism. But the question is whether these strategic benefits are worth the cost in lost American standing from being associated with a government that is gunning down unarmed demonstrators in the streets — and even, reportedly, shooting helpless prisoners in its custody under the guise of thwarting a jailbreak.

Those costs should be brought home by the Somoza analogy: Years of support for Somoza’s tyranny resulted in a 1979 revolution led by the anti-American Sandinistas. There is good cause to fear similar blowback in Egypt. Even if the military succeeds in consolidating power and temporarily crushing the Brotherhood, as it is likely to do in the short term, it is sowing long-term seeds of hatred.

Remember where Al Qaeda came from: Its co-founder and current leader Ayman Zawahiri is Egyptian. So was Sayyid Qutb, the spiritual godfather of modern-day Islamism. Qutb died in an Egyptian prison; Zawahiri was tortured in one. This rough treatment did not stamp out Islamism; it simply drove it underground and led it toward the way of the gun. The assassination of Anwar Sadat was one sign of the backlash to repression. The rise of Al Qaeda was another.

It is no coincidence that both Osama bin Laden and Zawahiri hailed from U.S.-allied nations that repressed their own citizens. Both men were drawn to the conclusion that the way to free their homelands was to attack their rulers’ patron. It is reasonable to expect that a new generation of Islamists in Egypt, now being taught that the peaceful path to power is no longer open, will turn to violence and that, as long as Washington is seen on the side of the generals, some of their violence will be directed our way.

Paradoxically, the generals, despite their covert cooperation with the United States, encourage this very outcome by demonizing the United States (and Israel) in their internal propaganda. This was a pattern long exhibited by Egypt’s ousted president, Hosni Mubarak, and it is now being repeated by his would-be successor, Gen. Abdel Fattah Sisi. Once again the state-controlled Egyptian airwaves are flooded with anti-Western vitriol blaming all of Egypt’s woes, from a depressed economy to violence in the streets, on unnamed Western, and especially American, agents. This is what desperate governments with scant legitimacy do to justify their rule — they claim to be protecting the people from dark, alien forces. In the process, the generals are stirring up the very anti-American terrorism they claim to be fighting.

The generals are also doing their best to demonize the brief period of rule by ousted President Mohamed Morsi and the Muslim Brotherhood. I have no brief for the Brotherhood: Both its objective (a theocratic society) and its methods (slowly squeezing out dissent) are abhorrent. But remember what didn’t happen under Morsi: Egypt didn’t abrogate the Camp David accords, it didn’t give a blank check to Hamas, and it didn’t end military cooperation with the United States or Israel.

One could argue that this was because Morsi didn’t have full control of the state; even during his presidency, the Egyptian army retained a large measure of autonomy. That may be true, but, if so, it only shows why the coup and the current crackdown are so unnecessary: There were already de facto limits on Morsi’s power.

Now there is no counterbalance to the military, and the gloves are off. The army appears to be bent on crushing the Brotherhood by force. If it could accomplish this, I might be prepared to applaud. But I doubt the army can succeed in destroying a popular mass movement. The more likely outcome is continuing violence and instability — and fresh threats to American interests.

How should Washington react? I am under no illusion that cutting off $1.3 billion a year in annual U.S. military assistance would cause the Egyptian army to mend its ways; the rich Persian Gulf autocracies, such as Saudi Arabia, are providing more than enough money to offset America’s contribution. But at the very least a suspension of U.S. military aid would lessen our complicity in whatever horrors befall Egypt next and heighten our credibility when we lecture China, Russia, Zimbabwe, Venezuela, Cuba, Syria, North Korea or Iran on the subject of human rights.

Max Boot, a contributing writer to Opinion, is a senior fellow at the Council on Foreign Relations and the author of “Invisible Armies: An Epic History of Guerrilla Warfare From Ancient Times to the Present.”

2 Replies to “HISTORY’S LESSON: CUT OFF EGYPT By Max Boot”