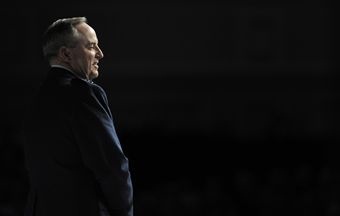 DeM Banter: always enjoy Gen Welsh’s thoughts, words, and vision…odd note for him to end on, …And at some point in the future, the Air Force “will be the best Air Force in the world.” Would like to see that transcript…

ORLANDO, Fla. — Air Force Chief of Staff Gen. Mark Welsh warned a Florida crowd this morning that sequestration will leave deep cuts on the service that will threaten both personnel and technology over the next decade.

Modernization and readiness stand to suffer, although “we have no idea” what that might look like long term. By mid-May, Welsh said, training will be “lower than acceptable.” Large-scale training missions, such as Red Flag, will have to be canceled, and training for other large projects is also at risk.

Sequestration will cause the force to lose three F-35s “this year,” and some cyber software development will miss initial operating capability. Welsh said he “hopes” the cuts won’t threaten the Air Force contract for the new KC-46 tanker, but the service has to “wait and see.”

Similarly, on the new long-range bomber, the service must “wait and see the impact of the cuts” before knowing the outcome.

Much of what Welsh said repeated statements made during testimony on Capitol Hill last week, when the Joint Chiefs appeared before the House and Senate Armed Services committees. But unlike his time in front of Congress, this speech was geared toward an Air Force audience.

The Air Force’s top general emphasized the human impact of the cuts, highlighting the personal stories of enlisted service members. Welsh’s message: The power behind the Air Force is the people, and those people will be hurt by sequestration.

“We can do anything” because of the service members, Welsh said after telling a number of stories, “if we help them.”

The general also praised the civilian force that is facing a collective “31.5 million” hours of furloughs. Under guidance issued last month by top Air Force officials, civilian workers face up to 22 days of furloughs per individual. Welsh stated that 40 percent of the cyber and 50 percent of the space force are civilian.

Welsh struck a hopeful note toward the end of his speech.

“We’re going to get through this financial mess we’re mired in right now” with the help of the airmen. And at some point in the future, the Air Force “will be the best Air Force in the world,” Welsh said.