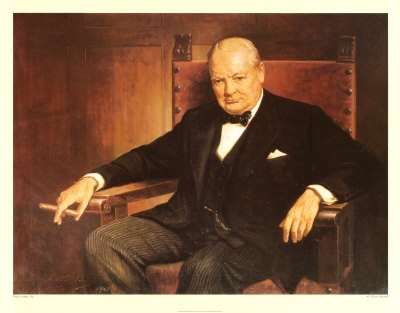 DeM Banter: exactly what we need as a nation today…

In 1940, a war-weary Britain was on the verge of capitulation. Here’s how Churchill turned it around–and what it means for you..

In 1940, when Winston Churchill became Prime Minister of Great Britain, the nation was in a state of severe crisis. Not only had its military suffered several setbacks in World War II, but the Prime Minister’s war Cabinet, deeply demoralized, was pushing Churchill to reach out to Italy’s Benito Mussolini to help orchestrate a truce with Hitler.

Churchill knew that Hitler could not be trusted and that negotiating with him would effectively constitute surrender. He desperately needed to win over his Cabinet. So he told them, “I am convinced that every man of you would rise up and tear me down from my place if I were for one moment to contemplate parley or surrender. If this long island story of ours is to last, let it end only when each one of us lies choking in his own blood upon the ground.” The response? A standing ovation. The voices of appeasement were quelled.

This story yields profound lessons about how great leaders—in business as well as politics—inspire greatness. As Churchill understood, people need to be reminded of their positive qualities—and their poor behavior must be characterized as being out of character. Accusations and scolding only reinforce the negatives.

Most of us know this instinctively, but in the heat of the moment, it’s easy to forget how powerful an insight it can be. In an experiment at Harvard in the early 2000s, for example, psychologists gave a math test to a group of college students, all Asian American women. Researchers randomly split the group into two. Before being given the test, one group was subtly reminded that they were women; the other that they were Asian Americans. What happened? The first group performed below average; the second group, above it. The lesson: Perceptions—in this case, that women are weak in math and that Asian Americans excel in it—can have a huge impact on performance. Other studies have found the same thing. In the 1970s, researchers at Harvard asked subjects to take a math test, then paired them up to role-play a boss and an assistant. Then they were given another test. The scores of the assistants dropped an average of 50%.

As the leader of a company, of course, you are constantly faced with employees who do not perform up to expectations. What should you do? The single worst thing is to call them lazy and attempt to shame them into taking action. Instead, employees need to be reminded of what they are capable of accomplishing, even as you observe that they are falling short of their potential.

Which brings us back to Sir Winston. In his early days as Prime Minister, Churchill also had to exhort a war-weary military, Parliament, and public to stay the course. In a make-or-break speech to the House of Commons, Churchill acknowledged “the darker side of our danger and burdens” and went on to say, “It is in adversity that British qualities shine the brightest, and it is under these extraordinary tests that the character of our slowly wrought institutions reveals its latent, invisible strength.” The speech has been credited with helping to revive Britain’s sagging spirits and gradually changing the course of the war.

So if your people seem to have lost some of the passion they once had for their jobs and your company—and, let’s face it, working at a start-up can be a very rocky ride—why not take a page from Churchill and passionately remind them about the light within them? Who knows what possibilities you may create?

Hitendra Wadhwa is a professor at Columbia Business School, where he teaches a popular class on personal leadership, and founder of the Institute for Personal Leadership. He has also worked at McKinsey & Company, and founded Paramark, an online marketing firm. @hitendraw