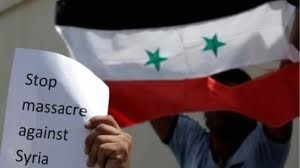 The Obama administration and its allies and international partners have begun serious discussions about potential military involvement in Syria, even as they continue to press for nonviolent solutions to the carnage there.

With little progress made in the two weeks since 70 countries and international institutions pledged in Tunis to concentrate their efforts on humanitarian and diplomatic fronts, there is a growing willingness to consider additional options.

Possibilities include directly arming opposition forces, sending troops to guard a humanitarian corridor or “safe zone” for the rebels, or an air assault on Syrian air defenses, according to officials from the United States and other nations opposed to Syrian President Bashar al-Assad.

But the governments remain deeply divided over the scope of any intervention, how and when it would happen, and who would participate. With Russia still opposed to a U.N. mandate, many question the legitimacy of any military options under international law.

U.S. officials say their strategy remains focused on humanitarian aid and organizing the Syrian opposition. But hopes are fading that the opposition will provide a united front sufficient to merit international recognition, as happened in Libya, or that Assad can be persuaded to yield.

As Syrian forces launched a new assault Saturday on the northern region of Idlib, Assad repeated his insistence that the year-long uprising was the work of outside extremists. No political dialogue could succeed “as long as there are armed terrorist groups operating and spreading chaos and instability,” Assad told visiting U.N. and Arab League envoy Kofi Annan on Saturday, according to Syria’s state news agency.

A U.N. statement said that the talks were “candid and comprehensive” and that Annan would meet with Assad again on Sunday.

At an Arab League meeting in Cairo, Russian Foreign Minister Sergei Lavrov insisted that “we’re not protecting any regime.” He said Russia was safeguarding “international law” rather than “looking for a special prize or geographic interest,” an apparent dig at those pushing for intervention in a country that has been Russia’s firmest ally in the Middle East.

Risks to region are growing

There is widespread agreement that the threat to regional and international stability increases with each day that passes, as more civilians are killed in ever-more brutal ways, with no progress toward a peaceful transition.

At the same Senate hearing, Gen. James N. Mattis, head of the U.S. Central Command, known as Centcom, said that the replacement of Assad with a democratic government would be “the biggest strategic setback” in 25 years for Iran, Assad’s other principal ally.

Although both Qatar and Saudi Arabia have said they are willing to arm the rebels, other nations are concerned about the cohesiveness and intentions of the Syrian opposition.

In broad terms, other options include establishment of an internationally protected “safe zone” along Turkey’s 500-mile border with Syria, where humanitarian and military aid would be assembled and opposition military forces organized, or a Libya-like air assault to destroy Syria’s formidable air defenses.

The United States is prepared to provide communications equipment and intelligence to an effort aimed at arming the opposition, according to U.S. and other officials from the region, who agreed to discuss the situation only on the condition of anonymity.

Only the United States is seen as capable of organizing and sustaining the most extreme alternative: establishment of a no-fly zone or direct air protection. U.S. defense officials have said it would take weeks to prepare for any such move, and additional weeks to execute it. Large numbers of aircraft and personnel would need to be moved from other areas of operation.

In hearings last week, some lawmakers, led by Sen. John McCain (R-Ariz.), insisted the administration had a moral duty to use whatever means necessary to stop the Syrian slaughter.

Gen. Martin E. Dempsey, chairman of the Joint Chiefs of Staff, said preliminary estimates of what a U.S. military role would require had already been made under President Obama’s direction, although no decision had been reached to begin developing detailed military options.

But “we would have to have some legal basis,” Dempsey said, either “the consent of a nation, in our national self-defense, or with an UNSCR,” a U.N. Security Council resolution.

Defense Secretary Leon E. Panetta’s reference to obtaining “international permission,” made in a Senate hearing Thursday, raised some ire among Republicans. Sen. Jeff Sessions (R-Ala.) said he was “breathless” at the idea that the United States would ask outsiders — rather than Congress — for permission to deploy its military forces.

But even if the administration determined that the situation was a direct threat to U.S. national security, officials say, it believes international participation is both prudent and necessary.

Turkey, whose role would be key in any intervention, from safe zones to no-fly zones, has been the most skittish about the legal grounds. Even a “humanitarian corridor” to deliver aid to besieged Syrians would require some kind of outside military involvement, a senior administration official said.

“After Srebrenica, nobody is going to want a humanitarian corridor unless there are the means and authority to protect it,” the official said, referring to the 1995 massacre of Bosnian Muslims in a supposedly “safe area” under U.N. protection.

NATO intervened without U.N. authorization in bombing Serbia during the 1999 Kosovo war, a conflict that pro-intervention lawmakers have cited as a template. Panetta said last week that he thought NATO should take up the Syria issue, but on Saturday, a senior NATO official said that is unlikely to happen.

Following a meeting Thursday with Tunisian President Moncef Marzouki, Turkish President Abdullah Gul said his government was opposed to any intervention “from outside the region.” Marzouki said Tunisia would be willing to send forces to Syria as part of an Arab peacekeeping force.

If all else fails, Turkey has indicated it might be willing to accept an agreement by the newly formed international Friends of Syria group, which first met in Tunis two weeks ago. The group, which includes Arabs, Europeans and the United States, is due to hold its next gathering in Istanbul in late March or early April.

But even international unity, another senior diplomat from the region said, may not be enough in the absence of opposition unity inside Syria.

Days after the Syrian National Council was recognized in Tunis as “a” legitimate representative of the opposition, the group fractured. Haitham al-Maleh, a former judge who was held for years in Assad’s prisons, and 20 other council members declared the opposition council too weak and too dominated by exiles, and broke off to form their own organization.

When SNC President Burhan Ghalioun later announced the formation of a defense ministry to set strategy for the Free Syrian Army, opposition armed forces said they would decide their own strategy and leadership.