DeM Banter: tragic situation but without a clear, crisp, concise, strategy this could rapidly escalate to what Friedman mentioned in his article.  Also interesting that The London Telegraph reported the US would not engage until after the election.  Curious where the funding will come from as well…clearly there are no easy answers here…there is risk that must be carefully calculated. 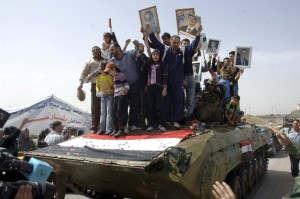 WASHINGTON – The Obama administration is considering its options for more direct involvement in the Syrian civil war if the rebels opposing the Assad regime can wrest enough control to create a safe haven for themselves, U.S. officials said.

Secretary of State Hillary Rodham Clinton says it is only a matter of time before the rebels have enough territory and organization to create such areas.

“More and more territory is being taken,” Clinton said this week. “It will eventually result in a safe haven inside Syria, which will then provide a base for further actions by the opposition.”

Officials are already starting to brainstorm how a safe zone might allow Washington to step up its assistance, which has been limited to humanitarian aid and nonlethal equipment such as medical supplies and communications gear.

For now, U.S. officials are standing by their assertion that they won’t provide arms to Syria’s anti-Assad forces.

With Syria’s government fighting back forcefully against rebels in Damascus, Aleppo and elsewhere, it is still unclear whether they could create a secure staging ground for the rebellion. The Libyan militia that removed Moammar Gadhafi from power last year had set up the city of Benghazi as a safe haven, creating a central place to meet and strategize and an entry point for supplies from NATO and Arab countries.

The discussions on Syria come as the U.S. and its international partners look for a shift in the country’s bloody, 16-month conflict, which began with Syrian President Bashar Assad’s brutal crackdown on protesters.

More than 19,000 people have been killed, according to opposition activists, and despite increased cracks in the regime’s military and political stability, there remains little to suggest an imminent end to the violence.

The establishment of a safe zone would settle one issue: the lack of an actual place inside Syria for other nations to engage with the opposition on the ground and deliver supplies into the heart of the conflict.

The U.S. would be able to shift Syrian-watching officials they have deployed in places such as Jordan and Turkey into Syria. And governments such as Saudi Arabia and Qatar that have been providing weapons to the opposition would have a more direct pipeline for military assistance.

But officials cannot point to when the rebels might be able to carve out some autonomous space for themselves within Syria. The rebels remain heavily outgunned by Assad’s forces.

Under the current circumstances, U.S. diplomatic efforts have been stymied. Russia and China have shielded the Assad regime from U.N. Security Council action three times, most recently last week. And U.S.-led efforts such as sanctions and a campaign of international isolation may have sapped Syria’s government of funds, but not its resolve to crush what it regards as an armed insurgency.

In the past month, the Obama administration has spoken of the rebels’ growing ability to challenge the Assad regime’s military supremacy.

National Security Council spokesman Tommy Vietor noted the pace of high-level regime defections was accelerating and that the U.S. and its partners were still advocating a political transition away from four decades of dictatorship under the Assad family dynasty.

The sooner that happens, he said, “the greater the chance we have of averting a lengthy and bloody sectarian civil war and the better we’ll be able to help Syrians manage a stable transition to democracy.”

Clinton went a step further earlier this week, offering a battlefield picture that included Syria’s ragtag alliance of militia beginning to take control of parts of the country.

She said the opposition should be preparing for how it will maintain order when it controls territory.

“They have to start working on interim governing entities. They have to commit to protecting the rights of all Syrians, every group of Syrians. They have to set up humanitarian response efforts that we can also support. They’ve got to safeguard the chemical and biological weapons that we know the Syrian regime has,” she said.

The U.S. is also preparing, though it doesn’t want to call its shots. And administration officials insist that it won’t be the U.S. military that creates safe zones for the Syrian opposition — as proponents of intervention such as Republican Sen. John McCain have proposed.

Since the Syrian conflict started, U.S. officials have repeatedly cited the lack of a safe zone in Syrian territory as one of several hindrances to more aggressive American assistance — from establishing a no-fly zone over parts of the country to providing weaponry to the opposition.

Other hurdles have included a lack of regional and international consensus, the opposition’s disorganization and internal rivalries, the inability to get any U.N. mandate for action and a lingering sense that American or other foreign intervention might actually mean more lives lost than saved. American officials also say involvement could prompt greater instability in a powder-keg region.

The opposition has been essentially limited to hit-and-run attacks and unable to hold any major Syrian population centers. In addition, officials note that the Assad regime is unlikely to cede a city like Aleppo without the kind of fight the rebels are unable to win.

The likely result is that any territory the rebels are able to take, occupy and defend will be far from the Mediterranean coast and not well served by existing infrastructure like good roads, solid bridges, power and water. That would complicate the establishment of foreign consulates or liaison offices, said the officials, who spoke on condition of anonymity because they said planning was at an early stage and they were not authorized to discuss it publicly.

Underscoring the value some see in the safe zones, more than 60 foreign policy experts and former U.S. government officials sent a letter to President Barack Obama this week urging him to use U.S. air power immediately to patrol territory seized by the opposition. The mainly Republican group accused the president of “complicity in oppression” for failing to halt the bloodshed.

Syria’s most prominent defector offered himself up Thursday as a figure to unite the fractious opposition, saying he failed to persuade his former friend, President Bashar Assad, to end a bloody crackdown that has killed thousands of Syrians.

The remarks by Manaf Tlass, a Syrian brigadier general until he abandoned the regime this month, were published in a Saudi newspaper just as opposition factions gathered in Qatar to try to agree on a transitional leadership if Assad’s regime falls.

Some opposition members are deeply skeptical of Tlass, believing he’s far too close to the regime and nothing more than a fair-weather friend.

A high-ranking Iranian official said his country is ready to share “experience and capabilities” with the Tehran-backed regime of President Bashar Assad in Syria.

The comments reinforce Iran’s support for its main Middle East ally and counter speculation that Iran’s leadership was facing internal battles over whether to continue their backing for the embattled Assad.