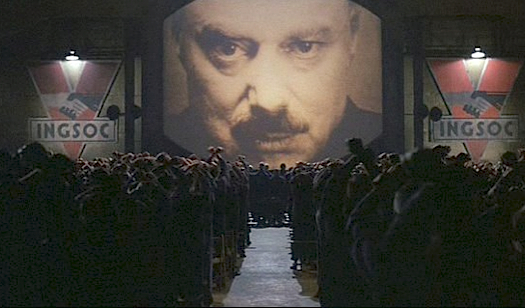 Could just be me (a lot of times…it is) but don’t we need new ideas in the U.S.?  No I don’t buy the Big Brother analogy and I love Orwell’s Nineteen Eight-Four…honestly, I’m not sure our federal government is Big Brother smart. But where is Winston Smith?  Or where is the “unnamed heroine” that comes to smash the video screen in Apple’s commercial below?

Where are the NEW thinkers?  Is this why “Innovation” has become all the buzz in the business world? Just a couple quotes that have me thinking…. 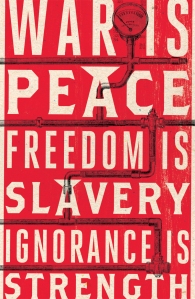 At the tactical level:  I am hopeful–I see many brilliant thinkers, at the operational level:  I am nervous.  At the strategic–I get down right scared.

If everyone is thinking alike, then somebody isn’t thinking.  -General George S Patton

No solution yet, but we will keep working on it.  Anyhow… a big fan of the novel and the commercial:  stole some facts from Wikipedia below if anyone is interested….

Nineteen Eighty-Four occurs in Oceania, one of three intercontinental super-states who divided the world among themselves after a global war. Most of the action takes place in London, the “chief city of Airstrip One“,[28] the Oceanic province that “had once been called England or Britain”.[29] Posters of the Party leader, Big Brother, bearing the caption “BIG BROTHER IS WATCHING YOU” adorn the landscape, while the ubiquitous telescreen (transceiving television set) monitors the private and public lives of the populace. The social class system of Oceania is threefold:

As the government, the Party controls the population with four ministries:

“1984” is only a television commercial which introduced the Apple Macintosh personal computer for the first time.  Its only U.S. daytime televised broadcast was on January 22, 1984 during and as part of the telecast of the third quarter of Super Bowl XVIII.  It has since been seen on television commercial compilation specials, as well as in “Retro-mercials” on TV Land. The estate of George Orwell and the television rightsholder to the novel 1984 considered the commercial to be a flagrant copyright infringement, and sent a cease-and-desist letter to Apple and Chiat/Day in April 1984. The commercial was never televised as a commercial after that.

“1984” used the unnamed heroine to represent the coming of the Macintosh (indicated by her white tank top with a cubist picture of Apple’sMacintosh computer on it) as a means of saving humanity from “conformity” (Big Brother). These images were an allusion to George Orwell‘s noted novel, Nineteen Eighty-Four, which described a dystopian future ruled by a televised “Big Brother“. The rows of marching minions have direct cinematic parallels with those in the opening scenes of the classic dystopian film Metropolis.

Originally a subject of contention within Apple, it has nevertheless consistently been lauded as a classic, winning critical acclaim over time. It is now considered a watershed event and a masterpiece in advertising, and is widely regarded as one of the most memorable and successful American television commercials of all time.