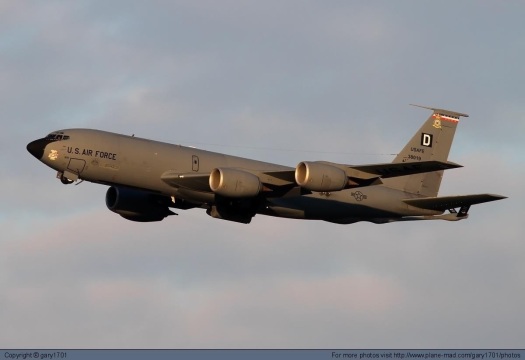 DeM Banter: the Legacy Continues! Long fly the Bloody Hundredth… Proud of you all.

It may not have the level of attention of operations in Afghanistan, but Air Force refueling operations just surpassed 200 missions over four months while assisting the French in Mali.

The KC-135s from the 351st EARS began operations Jan. 27 to assist the French Air Force’s anti-terrorism missions in the western Africa country.

“We recognize our role as tankers will always be to support others,” 351st EARS commander Lt. Col. Timothy Kuehne said in a release. “Our combined operations with the French in Mali have given us a chance to prove our ability to contribute to anti-terrorism operations led by our partners around the world.”

The Air Force agreed in January to provide immediate support through airlift, refueling and intelligence sharing, Pentagon officials said. The French Air Force’s Air Liaison Office coordinates the missions between the Stratotankers and French fighters such as Dassault Mirage F-1s and Rafales.

Through February, the Air Force flew 47 C-17 sorties moving a total of 1,200 tons of equipment and supplies along with 975 passengers. The Air Force has no ongoing airlift missions.

In addition to the mobility operations, the Defense Department signed a “status of forces” agreement with the government of Niger to set up a drone base in that country. U.S. Africa Command deployed unarmed Predators and about 100 personnel to set up the base as an effort “designed to promote regional stability in support of U.S. diplomacy and national security,” according to the Defense Department.