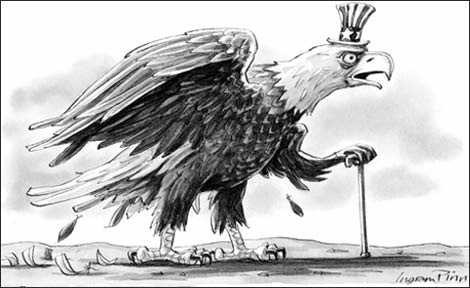 DeM Banter: don’t want to get too dystopian, but what a great article from VDH. I am still struggling with why America believes it is smarter than history. We should be learning from failed empires not copying them, history it filled with nations that have followed the trajectory we are on and who have failed miserably. This nation has so much prosperity, we have everything going for us…, why would we look to squander it. We need to make some tough choices now, followed with a vision and a strategy to restore, mend, and heal this incredible country…thoughts?

Why do once-successful societies ossify and decline?

Hundreds of reasons have been adduced for the fall of Rome and the end of the Old Regime in 18th-century France. Reasons run from inflation and excessive spending to resource depletion and enemy invasion, when historians attempt to understand the sudden collapse of the Mycenaeans, the Aztecs, and, apparently, the modern Greeks. In literature from Catullus to Edward Gibbon, wealth and leisure — and who gets the most of both — more often than poverty and exhaustion, cause civilization to implode.

One recurring theme seems consistent in Athenian literature on the eve of the city’s takeover by Macedon: social squabbling over slicing up a shrinking pie. Athenian speeches from that era make frequent reference to lawsuits over property and inheritance, evading taxes, and fudging eligibility for the dole. After the end of the Roman Republic, reactionary Latin literature — from the likes of Juvenal, Petronius, Suetonius, and Tacitus — pointed to “bread and circuses,” as well as excessive wealth, corruption, and top-heavy government.

For Gibbon and later French scholars, “Byzantine” became a pejorative description of a top-heavy Greek bureaucracy that could not tax enough vanishing producers to sustain a growing number of bureaucrats. In antiquity, inflating the currency by turning out cheap bronze coins was often the favored way to pay off public debts, while the law became fluid to address popular demands rather than to protect time-honored justice.

After the end of World War II, most of today’s powerhouses — China, France, Germany, Japan, South Korea, Russia, and Taiwan — were either in ruins or still pre-industrial. Only the United States and Great Britain had sophisticated economies that survived the destruction of the war. Both were poised to resupply a devastated world with new ships, cars, machinery, and communications.

In comparison with those of Frankfurt, the factories of 1945 Liverpool had survived mostly intact. Yet Britain missed out on the postwar German economic miracles, in part because after the deprivations of the war, the war-weary British turned to class warfare and nationalized their main industries, which soon became uncompetitive.

The gradual decline of a society is often a self-induced process of trying to meet ever-expanding appetites rather than a physical inability to produce past levels of food and fuel or to maintain adequate defense. Americans have never had safer workplaces or more sophisticated medical care — and never have so many been on disability.

King Xerxes’ huge Persian force of 250,000 sailors and soldiers could not defeat a rather poor Greece in 480 b.c. Yet a century and a half later, a much smaller invading force from the north under Philip II of Macedon overwhelmed the far more prosperous Greek descendants of the victors of Salamis.

Given our unsustainable national debt — nearly $17 trillion and climbing — America is said to be in decline, although we face no devastating plague, nuclear holocaust, or shortage of oil or food.

Americans have never led such affluent material lives — at least as measured by access to cell phones, big-screen TVs, cheap jet travel, and fast food. Obesity rather than malnutrition is the greater threat to national health. Flash mobs go after electronics stores, not food markets. Americans spend more money on Botox, face lifts, and tummy tucks than on the age-old scourges of polio, smallpox, and malaria.

If Martians looked at the small houses, one-car families, and primitive consumer goods of the 1950s, they would have thought the postwar United States, despite a balanced budget in 1956, was impoverished in comparison with an indebted contemporary America where consumers jostle for each new version of the iPhone.

By any historical marker, the future of Americans has never been brighter. The United States has it all: undreamed-of new finds of natural gas and oil, the world’s preeminent food production, continual technological wizardry, strong demographic growth, a superb military, and constitutional stability.

Yet we don’t talk confidently about capitalizing and expanding on our natural and inherited wealth. Instead, Americans bicker over entitlement spoils as the nation continues to pile up trillion-dollar-plus deficits. Enforced equality, rather than liberty, is the new national creed. The medicine of cutting back on government goodies seems far worse than the disease of borrowing trillions from the unborn to pay for them.

In August 1945, Hiroshima was in shambles, while Detroit was among the most innovative and wealthiest cities in the world. Contemporary Hiroshima now resembles a prosperous Detroit of 1945; parts of Detroit look like they were bombed decades ago.

History has shown that a government’s redistribution of shrinking wealth, in preference to a private sector’s creation of new sources of it, can prove more destructive than even the most deadly enemy.

— NRO contributor Victor Davis Hanson is a senior fellow at the Hoover Institution. His The Savior Generals will appear in the spring from Bloomsbury Books. © 2013 Tribune Media Services, Inc.

4 Replies to “The Decline of America by Victor Davis Hanson”