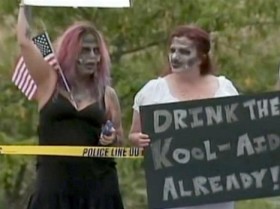 I came across an article yesterday, 5 Leadership Fads to Ignore by Steve Tobak in inc.com (view original).  I usually quite fond of Mr. Tobak’s work…honestly, he is a man who has produced some great, thought provoking articles… just click here.  I am all about the strong contrarian article, hence the reason I clicked on the link….but this piece has me scratching my bald head wondering if perhaps Steve was being perhaps “too clever by half.”  I have long struggled with “some academic, researcher, leadership guru, former somebody, or current wannabe (who) writes a book that catches on and becomes the latest and greatest business or self-help fad.”  Usually I have to ask…what makes this guy or girl an expert?  At times it is obvious, Jack Welsh, Steve Jobs, Colin Powell…these are easy and usually the reader want to learn more.

I also agree that many times these leadership concepts are “mostly old concepts repackaged with catchy new names, trite ideas that go viral and develop cult-like followings, or one person’s way of doing things that all the pod people think they should copy so they can be just like him.”

But where I disagree is…if this stuff helps a person grab a hold of something that in turn creates a desire, a concept, a framework, or strategy to lead…isn’t that a good thing?

Here are Mr Tobak’s suggestion on what to avoid….and some are fine with some very fine points…but some I fear that the baby is now sitting in the mud with the all that bathwater…

If you don’t want to become a zombie, then don’t drink the Kool-Aid. Avoid these fads in 2013 and beyond.

Listen to this. The Steve Jobs that everyone is trying to copy, the one who turned around Apple, isn’t even the same Steve Jobs whose toxic management style got him fired from the company he founded. That tragic and painful event changed him. It was a process he had to go through. That’s what created the guy who built the world’s biggest technology company. It’s called experience. You can’t clone it.

Of course, every executive and business leader wants employees to love their jobs and feel like they’re important to the company’s success. That’s a no-brainer. It’s also nothing new. The way to get employees motivated is by creating a culture where they really are empowered, where they really do make a difference, where they’re challenged and supported. It isn’t rocket science and you don’t have to hire Gallup to do it.

When did squeezing every minute of productivity out of the day become a national obsession? Let me tell you something. If you’re hopelessly disorganized, if you’re not a morning person, if you have an office that looks like it was hit by a tornado, if you haven’t cleaned up your inbox in three years, that doesn’t mean you’re going to be broke and miserable. It just means you’re like most of the successful and innovative people I’ve known over the years.

And if you still need to find more time, just do what I do. Less. Less is more. Prioritize. You’ll be more successful and happier. Just like that.

Traditional command-and-control style leadership is out. Soft skills are in. Who wouldn’t want an empathetic and self-aware CEO? The problem with the latest fad du jour, emotional intelligence, is that it’s impossible to measure objectively and it’s easy to game the questions. Also, if EI is really a predictor of business success, then how do you account for Steve Jobs, Bill Gates, Larry Ellison, Larry Page, Mark Zuckerberg, and dozens of other highly successful entrepreneurs and executives? That’s right; you can’t.

The whole “strengths” movement — also brought to us by the good research folks at Gallup — strikes me as another one of those “Good to Great” moments where what maybe worked for some companies in the past doesn’t do squat for others in the future.

DeM Banter:  I have done a bit of “leadership,” but not sure I have been anointed a “leadership expert,” but here are some points to ponder…

Managing like Steve Jobs:  Nothing wrong with a strong role model…is there?  Of course with every role model (minus one), one must examine the leader for his strengths and his faults. Jobs had a millions strengths and a 999,999 flaws.  If we can parse those and take the strengths–I would imagine we can all be better leaders for Mr Jobs example and experience…no?

Employee engagement:  Not sure I see where the author is disagreeing this is a good thing…all he points to is… “a no-brainer. It’s also nothing new.” So is this a fad? Or is it common sense?  Can we say eating is a fad? Or common sense?  Indeed, caring for your folks is just as basic…learn it, live it….but our leaders have to understand it.

Personal productivity and time management:  Steve, we are stretching here…shouldn’t we will be trying to get better? Maybe I am just a novice, but I honestly enjoy reading and discussing how different people organize…I’m a geek, but honestly I don’t have it all together, never have….never will.  So when I listen to Michael Hyatt’s podcast on his morning routine…I learn, I get better, and hopefully some of that rubs off on the organization and they are better as well.

Emotional intelligence:  Really? WE are all people… with different styles of leadership… if EI works for you… go with it.  One thing I have learned with “the latest fad du jour” is that I am an Emotional Idiot (different kind of EI), but I believe I can get better.  The examples of Steve Jobs, Bill Gates, Larry Ellison, Larry Page, Mark Zuckerberg are interesting… but who is to say they could not have put an even bigger dent in the universe if they were not/are not so totally and utterly self absorbed.

Strengths-based leadership:  An outstanding grasp of the obvious, there is no golden BB that works for every company when Steve says.. “what maybe worked for some companies in the past doesn’t do squat for others in the future.” Further… is this really about the company or is it about the leader?  Personally… I don’t care about the company, we are in the business of creating leaders….no?

Maybe I am a Kool-Aide drinking zombie…thoughts?